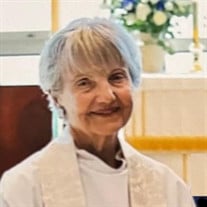 The Rev. Canon Anne Wilson Robbins, 91 years old, entered into the nearer presence of God on March 23, 2022, after a short illness. Anne Ballou Wilson was born in 1931 to Everett Wilson and Bernice Beckman Wilson. Everett sampled a number of... View Obituary & Service Information

The family of Anne Wilson Robbins created this Life Tributes page to make it easy to share your memories.

Send flowers to the Robbins family.