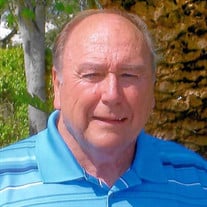 Arthur J. Buchanan 79, of Bonita Springs, FL died unexpectedly on August 30, 2021 at his residence. He was born on October 27, 1941 in Glasgow, Scotland a son of the late John and Catherine Douglas (Withers) Buchanan. A former longtime resident of La Plata, MD, he had been a resident of Bonita Springs since 2012. In 1948, he immigrated to the United States and was granted citizenship on May 11, 1954. He was a veteran of the U.S. Army having served from 1960 - 1963. Art spent his entire career with the federal government starting with the Treasury Department (Bureau of Public Debt) and retiring from the Comptroller of the Currency as a Communications Specialist. He retired in 1996 after 30 plus years of service. He was a member of the American Legion Post 135 – Naples, the Am Vets of Naples and the Moose Lodge of Bonita Springs. He is survived by his loving wife of more than 55 years, Jean M. Buchanan of Bonita Springs, FL; daughter, Karen J. Blasingame and her husband, Derek of Devine, TX; son, Michael A. Buchanan and his wife, Christina of Tampa, FL; two brothers, John “Ian” Buchanan and his wife, Louise of Bolivia, NC and David Buchanan and his wife, Janet of Darnestown, MD; sister, Kathryn McMahon and her husband, Glenn of Naples, FL and two grandchildren he loved dearly, Samantha E. Blasingame and Jessica J. Blasingame. Art was a kind person with a ready smile and full of humor. He will be missed by many. We’ll always remember you. He will be interred at Culpeper National Cemetery, Culpeper, VA at a date to be determined. In lieu of flowers, donations in his memory may be made to the American Heart Association at www.heart.org To sign his guest register or to leave online condolences please visit www.ShikanyFuneralHome.com. Arrangements are being handled by Shikany’s Bonita Funeral Home Family Owned and Operated Since 1978.

Arthur J. Buchanan 79, of Bonita Springs, FL died unexpectedly on August 30, 2021 at his residence. He was born on October 27, 1941 in Glasgow, Scotland a son of the late John and Catherine Douglas (Withers) Buchanan. A former longtime resident... View Obituary & Service Information

The family of Arthur J. Buchanan created this Life Tributes page to make it easy to share your memories.

Send flowers to the Buchanan family.