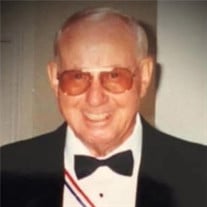 Arthur Amile Habighorst, Jr. 96, of Estero, FL died February 4, 2021 at Joanne’s House at Hope Hospice. Formerly of Chesterfield, MO, he had been an Estero resident for the past 30 years. Arthur was born July 24, 1924 in New Orleans, LA a son of the late Arthur A. Sr. and Irma (Stevens) Habighorst. He was a graduate of Eugene Coyle High School. Mr. Haibighort was a World War II veteran and received the Purple Heart for wounds received during the Battle of the Bulge. Mr. Habighorst worked for many years as a stereotype at the St. Louis Post Dispatch and a lithographer at McDonnell Douglas before retiring in 1991 and moving to Florida. He was an avid golfer, airplane pilot and enjoyed photography. He was a member of Our Lady of Light Catholic Community and the Knights of Columbus where he volunteered for many civic activities. Mr. Habighorst was married to Gloria (Lammlein) Habighorst (deceased) for 67 years; he is survived by his children, Arthur (Cindy) Habighorst, III of Naples, FL, Paul (Joyce) Habighorst of St. Peters, MO, Eileen (Richard) Kee of Ft. Myers, FL and Roy (Diana) Habighorst of Wentzville, MO; grandchildren, Lisa, Missy, Kristin, Arthur IV, Kaylie, Kelsey, Jerimie, Joel, Robert and Jennifer; great-grandchildren, Liam, Dylan, Zach, Chloe, Bailey, Alex, Emily, Michael, Andy, Cody, Logan and Farah. Mr. Habighorst remarried and is survived by his wife of two years, Rita Dorazio of Estero, FL. Burial will be held in St. Louis, MO. To sign his guest register or to leave online condolences, please visit www.ShikanyFuneralHome.com. Arrangements are being handled by Shikany’s Bonita Funeral Home Family Owned and Operated Since 1978.

Arthur Amile Habighorst, Jr. 96, of Estero, FL died February 4, 2021 at Joanne&#8217;s House at Hope Hospice. Formerly of Chesterfield, MO, he had been an Estero resident for the past 30 years. Arthur was born July 24, 1924 in New Orleans,... View Obituary & Service Information

The family of Arthur A. Habighorst Jr. created this Life Tributes page to make it easy to share your memories.

Send flowers to the Habighorst family.