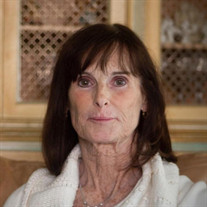 Barbara E. Roche 74, of Estero, FL died Saturday, March 6, 2021 in Fort Myers, FL after an extended illness. Barbara was born on February 4, 1946 in Roseboro, North Carolina, one of seven children of the late Vernon and Lillian (née Johnson) Carr. Barbara had been a resident of Estero since 2011 and a seasonal resident since 2001 coming from Chicago, IL. Barbara attended the University of Washington and spent her career as an Executive Assistant in the Real Estate and Consumer Products fields. Before her many illnesses, Barbara was an avid golfer and a member of the Shadow Wood Country Club. Barbara is survived by her beloved husband, Mark A Roche, who she married on August 27, 1993 in Stamford, CT; daughter, Michele Fioresi of Estero, FL; and two grandchildren, Nicholas Fioresi and Alyssa Fioresi and her husband, Adam Rea. She is also survived by her brother, Danny Rogers of South Carolina, and two sisters, Diane Elefante of New Jersey and Frances Rogers of Virginia. She was preceded in death by her parents and two brothers, John Carr and Jimmy Carr. As per her wishes, funeral services will be private. To honor her memory, the family suggests that donations in lieu of flowers be made to Barbara’s favorite charity, St. Jude’s Children’s Research Hospital, 501 St. Jude Place, Memphis, TN 38105-9959. If you wish to sign her guest register or to leave online condolences please visit www.ShikanyFuneralHome.com or https://www.myfarewelling.com/memorial/barbara-roche#gallery.

The family of Barbara E. Roche created this Life Tributes page to make it easy to share your memories.

Send flowers to the Roche family.