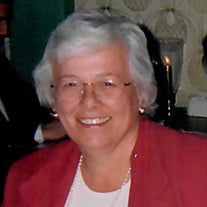 Barbara G. Sheehan 79, of Naples, FL died Saturday, November 14, 2020 at Naples Community Hospital. She was born on August 24, 1941 in Woonsocket, RI a daughter of the late Stephen and Anastasia (née Sowiecki) Gnot. Barbara had been a resident of Naples since 2010 moving from North Smithfield, RI. After high school, she attended Bryant College. While in high school she met the love of her life, and future husband, Thomas M. Sheehan. After dating for six years, while he was in college studying to be an Optometrist, they eventually married on October 17, 1964. After graduation, Dr. Sheehan joined a practice in Woonsocket and in 1981 Barbara became his office manager. She retired after 26 years as his office manager when he sold his practice. She was a parishioner at St. Leo the Great Catholic Church in Bonita Springs, FL. Her hobbies included knitting with her friends, water aerobics and she was an avid reader. Barbara is survived by her beloved husband of 56 years, Dr. Thomas M. Sheehan of Naples, FL; one daughter, Kelly S. Salema and her husband, Dennis of Derry, NH; her daughter-in-law, Tanya Sheehan of Kennesaw, GA, her sister-in-law Ruth Sheehan of East Hartford, CT and 5 grandchildren, Nicholas J. Salema and Allison L. Salema both of Derry, NH, Ryan Q. Sheehan of Kennesaw, GA, Craig W. Sheehan of Augusta, GA and Mark T. Sheehan of Kennesaw, GA. She was preceded in death by her parents, her brother-in-law, James Sheehan of East Hartford, CT, her sister-in-law, Carolyn Brand of North Smithfield, RI, and one son, Kevin T. Sheehan of Kennesaw, GA who died in August of this year. A Mass of Christian Burial will be celebrated on Thursday, November 19, 2020 at 10:00 AM at St. Leo the Great Catholic Church. 28300 Beaumont Rd., Bonita Springs, FL. The family will receive friends at the church from 9:30 AM until the time of the Mass. The Mass will be live-streamed on the Shikany’s Bonita Funeral Home and Crematory Facebook page beginning at 10:00 AM. In lieu of flowers, donations in her memory may be made to the Colorectal Cancer Alliance, 1025 Vermont Ave NW, Suite 1066, Washington, DC 20005 or to St. Jude Children’s Research Hospital PO Box 1893 Memphis, TN 38101-9950 or online at www.stjude.org. To sign her guest register or to leave online condolences please visit www.ShikanyFuneralHome.com. Arrangements are being handled by Shikany’s Bonita Funeral Home and Crematory Family Owned and Operated Since 1978.

Barbara G. Sheehan 79, of Naples, FL died Saturday, November 14, 2020 at Naples Community Hospital. She was born on August 24, 1941 in Woonsocket, RI a daughter of the late Stephen and Anastasia (née Sowiecki) Gnot. Barbara had been a resident... View Obituary & Service Information

The family of Barbara G. Sheehan created this Life Tributes page to make it easy to share your memories.

Send flowers to the Sheehan family.