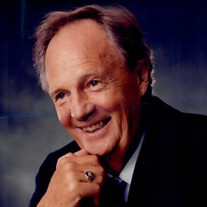 Carl Addison Kreager, 92 of Fort Myers, FL passed away peacefully on Friday, July 30, 2021 at Joanne’s House at Hope Hospice in Bonita Springs. Formerly of Lansing, MI he moved to Sanibel Island, FL in 1984 before relocating to Fort Myers in 1991. Carl was born January 31, 1929, and raised in Detroit, MI by wonderful parents, William A. and Beatrice M. Kreager, at a time when Detroit was a prosperous and proud city. He graduated from Cooley High School on January 28, 1947 and immediately enrolled at The University of Michigan. Carl had the good fortune to be a member of the 3 Big Nine Championship teams, 1 National Championship team and the 1951 Rose Bowl team. Mr. Kreager had the opportunity to own and operate successful ventures in Land Development, Residential Construction and Property Management. Survivors include his wonderful wife, Joan C. Kreager; two sons, Kurt and Brad Kreager; daughter, Michelle Kreager; and step-daughter, Lisa O’Hara. Also surviving are five grandchildren, Ahna, Aleiha, Drew, Lacey and Lucas and two great grandchildren, Lainey and Hank; as well as two nephews, Bill and Steve Kreager. In addition to his parents, he was preceded in death by his brother, George Kreager; and daughter, Kathleen Ives. Carl was always very proud of his friendships, teammates, business associates, and many social groups. His life was a wonderful experience. Carl’s family wishes to thank the nurses and staff at Joanne’s House at Hope Hospice for the loving care they provided to him. In lieu of flowers, memorial contributions in Carl’s name may be made to Joanne’s House at Hope Hospice, 27200 Imperial Parkway, Bonita Springs, FL 34135. Condolences may be offered by visiting www.ShikanyFuneralHome.com. Arrangements are being handled by Shikany’s Bonita Funeral Home, Family Owned Since 1978.

The family of Carl Addison Kreager created this Life Tributes page to make it easy to share your memories.

Send flowers to the Kreager family.