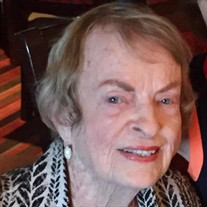 Collette M. Dierker, 95, a resident of Bentley Village in Naples, Florida died peacefully at her residence on January 25, 2022. Collette was born on September 21, 1926 in Columbus, Ohio. She was the daughter of the late Joseph S. and Marie E. (Smith) Stevens. Collette and her late husband, Frederick W. Dierker, MD were seasonal residents of Naples, Florida since the early 80’s. After the death of her husband in 1994, she became a full time resident of Bonita Bay in Bonita Springs, Florida. She was a graduate of Columbus North High School and then attended the Ohio State University, where she earned her Bachelor of Science degree in Home Economics and Nursing. While at Ohio State, she was a member of Pi Beta Phi sorority. She met her future husband at Ohio State, while he was attending medical school. They were married in 1954. Collette began her career as a registered nurse at an OB/GYN practice in Columbus. After her husband’s graduation from medical school, she helped him start a family practice in Columbus, Ohio. A number of years later, she left the practice to become a full-time homemaker. Collette loved family life and raising her sons. While living in Florida, Collette was a member of the First Presbyterian Church of Bonita Springs. She began playing tennis and made many friends on the tennis court. Collette enjoyed meals with friends, socializing and volunteering. She is survived by her two sons, David Dierker (Lori) of Bluffton, South Carolina, and Daniel Dierker (Beth) of Marietta, Georgia; four granddaughters, Megan (Jason) Cagle of Bluffton, Julia Dierker and Catherine Dierker of Marietta, and Molly Dierker of Bluffton. In addition to family, Collette is survived by a host of dear friends. Funeral services will be held on February 5, 2022, at 11:00 AM at the First Presbyterian Church of Bonita Springs, 9751 Bonita Beach Rd., Bonita Springs, Florida. There will be a small reception following the service. Graveside services will be held on Tuesday, February 8, 2022, at 9:30 AM at the Union Cemetery in Columbus, Ohio where she will be buried with her beloved husband. In lieu of flowers, contributions may be made to the First Presbyterian Church of Bonita Springs Missions Ministry. To sign her guest register or to leave online condolences, please visit www.ShikanyFuneralHome.com. Arrangements are being handled by Shikany’s Bonita Funeral Home Family Owned and Operated since 1978.

Collette M. Dierker, 95, a resident of Bentley Village in Naples, Florida died peacefully at her residence on January 25, 2022. Collette was born on September 21, 1926 in Columbus, Ohio. She was the daughter of the late Joseph S. and Marie... View Obituary & Service Information

The family of Collette M Dierker created this Life Tributes page to make it easy to share your memories.

Collette M. Dierker, 95, a resident of Bentley Village in Naples,...

Send flowers to the Dierker family.