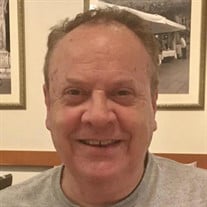 Dr. Craig C. Wood, 66 of Fort Myers, FL passed away Tuesday, February 1, 2022 in Fort Myers, Florida. Formerly of Findlay, OH and Indianapolis, IN, he moved to Bonita Springs, FL in 1982, and was a resident of Southwest Florida for the remainder of his life. Craig was born March 9, 1955 in Chicago, IL a son of Quentin H. and the late Margaret (Anderson) Wood. He spent his childhood in Park Forest, Illinois. Dr. Wood attended Indiana University where he earned his undergraduate degree and his doctorate in dental surgery degree. In 1982, he established his dental practice in Bonita Springs where he served his community until his retirement in 2001. Dr. Wood was a member of the American Dental Association and held the position of president of his Kiwanis Club chapter. He enjoyed traveling the world, visiting over 95 countries. However, one of his favorite destinations was Disneyworld, where he visited yearly with his family around Christmas time. Craig was also an avid sports fan, and especially loved his annual trip to Las Vegas with friends for the NCAA men’s basketball tournament. He had a fun-loving personality that earned him many friends and acquaintances, and he was known for his clever one-liners and nicknames for everyone he met. Survivors include his father Quentin, sister, Sara Wagner of Findlay, OH, loving children, Kate (Scott) Sadowski of Fort Lauderdale, FL, and Andrew (Kyi Phyu Shwe) Wood of Singapore, cherished grandchildren Maverick, Jett, and Oliver, and loving niece Elizabeth Wagner. In addition to his mother, he was preceded in death by his brother, Philip Scott Wood. Funeral services will be private. Memorial contributions may be made in Dr. Wood’s name to Kiwanis Children's fund. Arrangements are being handled by Shikany's Bonita Funeral Home, Family Owned Since 1978.

Dr. Craig C. Wood, 66 of Fort Myers, FL passed away Tuesday, February 1, 2022 in Fort Myers, Florida. Formerly of Findlay, OH and Indianapolis, IN, he moved to Bonita Springs, FL in 1982, and was a resident of Southwest Florida for the remainder... View Obituary & Service Information

The family of Dr. Craig Carson Wood created this Life Tributes page to make it easy to share your memories.

Send flowers to the Wood family.