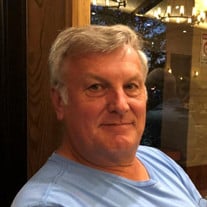 David B. Augustine, 66, passed away suddenly on March 6, 2022. David was born May 29, 1955 in Colver, PA, just outside of his beloved hometown Nicktown to Edward and Gertrude (Nealen) Augustine. David was joined in marriage to Diane Martin on July 12, 1975 and resided, worked and raised their children in West Chicago, IL. He retired in May of 2017 after 39 years at Fermi-Lab in Batavia, IL as a Mechanical Operations Manager and enjoyed retirement in Bonita Springs, FL. He kept busy in his retirement doing various projects on his home, but really enjoyed helping others and did just that for family, neighbors, and new friends. He enjoyed spending time with and hosting family in his home, as well as walks with his dog, cooking and baking. He loved history and learning about his ancestry. He liked talking to others and gathering all the information and being of service to all he encountered. He was a lighthouse to all who knew him. He was full of knowledge, endlessly selfless and had a work ethic even stronger. A devoted husband, father, grandfather, brother, uncle and godfather of extraordinary compassion, patience, strength and positivity. He touched many lives and hearts and was loved by all. He will be sadly missed and very warmly remembered. Dave is survived by his loving wife Diane; sons David (Lindsay), Joel and Timothy Augustine, grandchildren David Jr and Ariana Augustine, sibling Constance Augustine, Mark (Denise) Augustine, Joette (Robert) Watson, and Diane Augustine, in-laws Lillian LaJevic-Augustine, Patricia Augustine, Connie Augustine, Michael (Anna) Martin, Susan (Ron) Loosli, Gloria (Duane) Zawistowski, Peter (Janet) Martin and many nieces and nephews. Preceded in death by his parents; siblings Thomas, Jeanne, Anita, Joel, Kevin, Dennis, nephews David Rajnish and Francis Gerard. David’s family will receive friends on Sunday, March 13, 2022 from 1:00 PM – 3:00 PM at Shikany’s Bonita Funeral Home, 28300 Tamiami Trail So., Bonita Springs, FL 34134. A funeral service will begin at 3:00 PM. Arrangements are being handled by Shikany's Bonita Funeral Home, Family Owned Since 1978.

David B. Augustine, 66, passed away suddenly on March 6, 2022. David was born May 29, 1955 in Colver, PA, just outside of his beloved hometown Nicktown to Edward and Gertrude (Nealen) Augustine. David was joined in marriage to Diane Martin... View Obituary & Service Information

The family of David B. Augustine created this Life Tributes page to make it easy to share your memories.

Send flowers to the Augustine family.