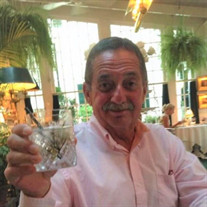 David Noel was a selfless provider for his loved ones and an active member of his community; a true family man. He was an avid lover of all things lively and social, quick with a joke, a dad-ism, and charm to spare. David was born in Bay City, MI on November 11, 1951 to David E. Noel and Geraldine Noel. He was the youngest of three children after his brother, Jim Noel, and sister, Jeanne Syring. As a teen in the 60’s, he developed a unique sense of self, enjoying the music scene in his hometown. He grew to discover his passion for the arts including photography, theatre, and broadcasting during his collegiate years at Eastern Michigan University. After teaching for one year he returned to his family’s roots in auto sales, which is how he met his wife, Joan, whom he married on August 6, 1982. They raised their two daughters, Molly and Katy, in Stockbridge, MI, where he founded Stoney Creek Car Company. Throughout his career within the Stockbridge area, David was a generous donor to the community, providing use of his sports cars during homecoming parades, sponsoring local sports teams, giving to the Stockbridge Athletic Boosters, and to other charitable organizations benefiting children. David had a wide variety of interests that he pursued in his free time with friends and family. He was a card and pool shark, instilling a deep love for these activities in his daughters, wife, and son-in-law, Tony. He would regularly host poker games and euchre tournaments with friends and family. He made family time a priority, treating them to trips to different states, abroad, and most often to Sawkaw, a shared cabin. Many of these trips were planned around visiting their daughter, Katy, as she traversed the U.S. On these vacations, snowmobiling, cross-country skiing, boating, golfing, and other adventures were always in abundance. David was an avid golfer, meeting weekly for his league games. He brought together a unique group of people, who bonded over his humorand go-go juice. Once a year, he organized a guy’s golf trip to Sawkaw where frivolity ensued. In his personal time, he poured over the history of World War II, in which his father had served, reading, watching documentaries, and visiting historical landmarks and museums. David’s passion for history was passed onto his daughter, Molly, who taught history for twelve years before becoming an administrator. In the final years of his life, he and his wife of 38 years lived between Estero, Florida and Ludington, MI, developing close friendships and leaving lasting impacts on those they connected with. Friends and family will always reminisce on David’s sense of humor, his ability to captivate his audience with stories, his theatrical attire at costume parties, his kind and generous spirit, his deep sense of pride in his treatment of others, and his willingness to lend an ear to those in need. In lieu of flowers, David’s family requests that donations in his memory be made to one of the following charitable organizations which benefit children: Save the Children - www.savethechildren.org St. Jude Children's Research Hospital - www.stjude.org A memorial gathering,for Dave, will be planned in the future To sign his guest register or to leave condolences, please visit www.ShikanyFuneralHome.com Arrangements are being handled by Shikany’s Bonita Funeral Home. Family Owned and Operated Since 1978

David Noel was a selfless provider for his loved ones and an active member of his community; a true family man. He was an avid lover of all things lively and social, quick with a joke, a dad-ism, and charm to spare. David was born in Bay City,... View Obituary & Service Information

The family of David E. Noel created this Life Tributes page to make it easy to share your memories.

David Noel was a selfless provider for his loved ones and an...

Send flowers to the Noel family.