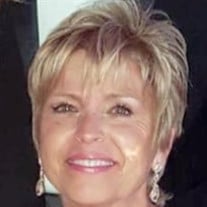 Debra “Debbie” Norton was a caring wife, daughter, mother, grandmother, sister and friend. Debbie left this world on February 9th, 2022 at the age of 66 after a courageous battle with cancer. She was born to Theodore and Esther Glowatsky on April 22, 1955 in Passaic, New Jersey. Debbie is survived by her husband, Lee; mother and step-father, Esther (Glowatsky) and Paul Morra; son, Cory (Christina) Copensky; daughter, Christy Copensky; step-children, Traci (Jason) Ziter, Chris Norton, Matt (Amanda) Norton; grandchildren, Isla and Ava Copensky, Jessica and Andrew Norton, Hailey, Colby and Lexi Norton, and Brecken Ziter; brothers, David (Adrienne) Glowatsky and Kenneth (Robyn) Glowatsky; and many nieces and nephews. She was preceded in death by her father, Theodore Glowatsky. Debbie received her Bachelor’s degree from Barry University in Miami, Florida. Although she was no stranger to hard work and enjoyed several years as the volunteer coordinator at North Collier Hospital, her most beloved was being a mother and grandmother. Debbie truly was the “glue” that kept her blended family together. Serving and encouraging others also brought Debbie great joy. Among many things she loved were watching sunsets at the beach, cycling and road trips with her husband. Debbie was active in her church community and was proud to be one of the founders of Hope City Church in Bonita Springs. A Celebration of Life will take place on Saturday, February 19, 2022 at 2 PM at Hope City Church, located at 12871 Trade Way Drive, Bonita Springs, FL 34135. In lieu of flowers, the family requests memorial contributions in Debbie’s honor to the children’s ministry at Hope City Church. To sign Debbie’s guest register or to leave online condolences, please visit www.ShikanyFuneralHome.com. Arrangements are being handled by Shikany’s Bonita Funeral Home and Crematory, Family Owned and Operated since 1978.

Debra &#8220;Debbie&#8221; Norton was a caring wife, daughter, mother, grandmother, sister and friend. Debbie left this world on February 9th, 2022 at the age of 66 after a courageous battle with cancer. She was born to Theodore and Esther... View Obituary & Service Information

The family of Debbie Norton created this Life Tributes page to make it easy to share your memories.

Send flowers to the Norton family.