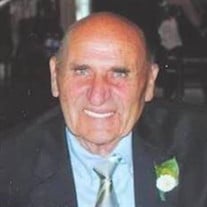 Donald Michael Leonard of Hacienda Village (formerly of South Yarmouth, MA and Vernon, CT) died peacefully Tuesday May 11th after a brief illness. He was born October 23, 1927 in Buffalo, NY. He was the oldest of two children—the son of late Pauline (Klein) and Francis Leonard. After being raised in North Java, NY he left to join the Merchant Marines to enlist in WWII at 16 years old. After the war he attended Kings Point College, NY and became a mechanical engineer. He served in the Merchant Marines as an engineer for 14 years. Following his service in the Merchant Marines, he worked for the Grace Line sailing to Chili, Peru and The Great Lakes. He loved his job and shared many stories of his travels. He met his wife Suzanne (Miller) at Bill Miller’s Riviera on Lake Erie and they were married on February 7, 1953 in Buffalo, NY. They recently celebrated their 68th wedding anniversary. Don joined the Travelers Insurance Company as an engineer in 1955 in Buffalo, NY. He transferred with the company to Erie, PA, Chicago, IL, and spent the remainder of his career at the home office in Hartford, CT. He lived in Vernon, CT where he and Sue raised their six children. He was actively involved in his community as a member of the Rockville High School Boosters and as a lectern at Sacred Heart Catholic Church. He retired after 35 years with the company and moved to Cape Cod in South Yarmouth, MA. He was an active member and president of “TREG” (Travelers Retired Engineer Group) and traveled extensively with the group annually until 2006. He was also a member of the American Legion in Massachusetts and Florida. He was known as the neighborhood “fix it” man. From cars to washing machines, everyone knew to call Don for any household emergency. In addition to his parents he was predeceased by his son, Donald M. Leonard, Jr. and his grandson Bryan Leonard. Don is survived by his wife Suzanne (Miller) of Bonita Springs, FL, daughter-in-law Linda Leonard of South Windsor, CT, daughter Michele Lynch and husband John of North Falmouth, MA, daughter Cynthia Prete and husband Paul of Cromwell, CT, son Doug Leonard of Bonita Springs, FL, daughter Lori Leonard of Buffalo, NY and daughter Janet Nichols and husband Chris of Norwell, MA. He leaves behind 12 grandchildren and 11 great-grandchildren who all loved spending holidays and summers on Cape Cod listening to Grandpa’s stories. He is also survived by his brother William Leonard and his wife Joyce of Wayne, PA. Don’s passion was his family, friends, jazz music and reading books on past presidents. He lived life to its fullest and was always there when you needed him. He was very proud of his family and all they have accomplished. His ashes will be placed at the National Cemetery in Bourne, MA. A celebration of his life will be held at a future date in Massachusetts. Arrangements are being handled by Shikany's Bonita Funeral Home, Family Owned Since 1978.

Donald Michael Leonard of Hacienda Village (formerly of South Yarmouth, MA and Vernon, CT) died peacefully Tuesday May 11th after a brief illness. He was born October 23, 1927 in Buffalo, NY. He was the oldest of two children&#8212;the son... View Obituary & Service Information

The family of Donald Michael Leonard created this Life Tributes page to make it easy to share your memories.

Send flowers to the Leonard family.