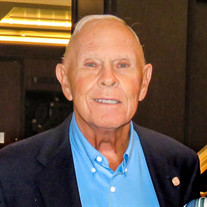 Donald Matthew Peterson, age 85, passed away peacefully on February 20, 2022 in Bonita Springs, Florida. Beloved husband of Patricia Peterson for the past 61 years; dear father of Daniel (Melanie), Linda (Steve) Renke, David (Cathy), Debra (Greg) Mink, James (Cherie), and the late Lisa. Doting grandfather of 14; joyful great-grandfather of four (and a fifth on the way). He is also survived by his sister, Kathleen (George) Wichelns, and both miss their loving parents, Catherine and Cornelius Peterson. Both born in Mount Vernon, New York, Don and Patti married in 1960 and later resided in Glenview and Lake Forest, Illinois, before becoming long-time residents of Pelican Landing in Bonita Springs, Florida. In his 49-year career as an actuary, Don rose to Chief Executive Officer and Chairman of the Board of Trustmark Insurance Company, which he led through a period of exceptional growth and success, including renaming the company from Benefit Trust Life and relocating headquarters from Chicago to Lake Forest. Previously, he held actuarial positions at Metropolitan Life in New York and North American Company for Life and Health Insurance in Chicago. Well respected and honored for his leadership within the life and health insurance industry and the actuarial profession and a Fellow of the Society of Actuaries, Don earned a range of initials after his name: FSA, MAAA, EA, CLU, ChFC, RHU. At Mount St. Michael Academy in the Bronx, NY, on a full academic scholarship, he earned high honors while leading their basketball team to New York City-wide accolades. Don then went on to earn a Bachelor of Arts in Economics, maxima cum laude, at LaSalle College (now University) in Philadelphia also on a full academic scholarship, starring on their intercollegiate basketball team as well. At LaSalle, he graduated first in his Army ROTC class, graduated second in his class at Officer Basic Course, and went on to serve active and then reserve duty in the artillery, reaching the rank of captain. Don also went on to graduate work at Harvard University, on a full teaching fellowship. Don was always active in his community, serving on the boards of Glenview’s public schools and Barat College, as well as numerous other civic, community, social, and sports organizations and boards. An active athlete, he excelled at basketball, baseball, golf, tennis, and curling at various stages of his life, winning numerous championships in each. This fueled his passion as a sports fan, being a long-time season ticket holder and fan of Chicago sports teams, the Bears, Bulls, Blackhawks, Cubs, and White Sox, attending their appearances in the Super Bowl, World Series, Stanley Cup Finals and NBA Finals. He combined his love of sports with his commitment to service by coaching youth sports in baseball and basketball for many years. Don was an avid traveler with Patti, a member of the Circumnavigators Club, and visitor to well over 100 countries, with a special love of smaller ship cruising. A long-time parishioner at Our Lady of Perpetual Help Parish in Glenview, a funeral mass will be held at his current parish, St Leo the Great Catholic Church, 28290 Beaumont Road, Bonita Springs, FL 34134, at 2 PM on Monday, March 14. Livestream available on Facebook Live through Shikany’s Bonita Funeral Home, Bonita Springs, FL. In lieu of flowers, donations in Don’s honor may be made to Hope Hospice, 27200 Imperial Parkway, Bonita Springs, Florida 34134. To sign Don’s guest register or to leave online condolences, please visit www.ShikanyFuneralHome.com Arrangements are being handled by Shikany’s Bonita Funeral Home, Family Owned and Operated since 1978.

The family of Donald Matthew Peterson created this Life Tributes page to make it easy to share your memories.

Send flowers to the Peterson family.