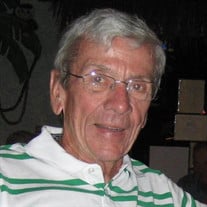 Donald Richard “Rich” Taylor, Jr. 83, of Bonita Springs, died Tuesday, May 12, 2020 after a brief illness. Rich was born on February 21, 1937 in Chicago, IL a son of the late Donald Richard and Julia Margaret (Creagh) Taylor, Sr. He and his late wife Grace had been a winter resident of the area since 1989 dividing their time between Lawton, MI and here in Bonita Springs. In 1997, they purchased a lot in Bonita Shores and built a home and in 2003 made Bonita Springs their permanent residence. Rich met his wife, the former Grace H. Skoglund while he was working at Midway airport in Chicago. They were married on August 3, 1957. In 1958, he began his career with Clark Lift Trucks and retired from the company as their Parts Manager in 1994. He was an avid musician and loved writing songs and lyrics. Later in life, he loved to sing Karaoke and on most nights you would find him doing what he loved at Sneaky Pete’s in Bonita Springs. He is survived by his loving son and daughter in law, Donald Richard Taylor, III and his wife, Diane of Bonita Springs, FL; two granddaughters, Jaclyn Nyssa Taylor of Minooka, IL and Emma Whitcomb and her husband, Charlie of Valdosta, GA and two sisters, Marie Patricia Carbone of Lehigh Acres, FL and Donna Lee Adams of Coldwater, Michigan. He was preceded in death by his parents, his beloved wife, Grace H. Taylor who died October 8, 2003 and his sister, Jesse Ann Ralston who died June 18, 2004. Private services will be held at the convenience of the family during this time. To sign his guest register or to leave online condolences please visit www.ShikanyFuneralHome.com. Arrangements are being handled by Shikany’s Bonita Funeral Home Family Owned and Operated Since 1978.

The family of Donald Richard "Rich" Taylor Jr. created this Life Tributes page to make it easy to share your memories.

Send flowers to the Taylor family.