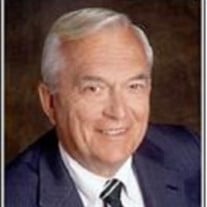 Edward G. Beimfohr passed away on July 26, 2020. He was born on December 31, 1932 in the small farming and coal mining town of Marissa, Illinois. After graduating from Marissa High School in 1950, he received a National Honor Scholarship from Washington University in St. Louis from which he graduated in 1953. He also graduated from the Law School there in 1956. He was valedictorian of each of his classes from high school through college and law school. He received the Phi Kappa Beta award as a junior in college and in Law School was Editor-in-Chief of the Law Quarterly. He also participated in athletics at Washington University, lettering in basketball and baseball, and serving as captain of the basketball team. Following his graduation from law school, after a brief period of legal practice in St. Louis, he accepted an offer to join the firm of Sullivan & Cromwell in New York City, where he practiced from 1957 to 1965. Thereafter, he joined and ultimately became a managing partner at Casey, Lane & Mittendorf (subsequently Windels Marx Lane & Mittendorf). Ed specialized in providing high-level legal and business advice in many areas to major family groups and ultimately served as an executor, trustee and trusted advisor to generations of prominent families. Over the course of his career, he also served as a director or trustee of more than a dozen corporations and charitable organizations. Ed was an enthusiastic and dedicated golfer in his spare time at his main club, Baltusrol Golf Club in Springfield, NJ where he served on the Board for many years and was President from 1996 to 1999. He was also actively involved at Pine Valley Golf Club in New Jersey where he maintained a home and served on the Board of Directors and Trustees, as well as Admissions Chairman and Secretary for many years. Ed's marriage to Joella White in 1951 continued until she passed away in 2005. He married again and is survived by his spouse, Silvia Netter, of Florida. He is also survived by children Cathy (Wilson), Larry and Douglas, 10 grandchildren, three great-grandchildren and a sister Carol Munsell. A celebration of life ceremony will be held at a later date. In lieu of flowers, the family requests that you make a contribution to a charity or organization of your choice in his memory. Arrangements are being handled by Shikany's Bonita Funeral Home.

Edward G. Beimfohr passed away on July 26, 2020. He was born on December 31, 1932 in the small farming and coal mining town of Marissa, Illinois. After graduating from Marissa High School in 1950, he received a National Honor Scholarship from... View Obituary & Service Information

The family of Edward G. Beimfohr created this Life Tributes page to make it easy to share your memories.

Send flowers to the Beimfohr family.