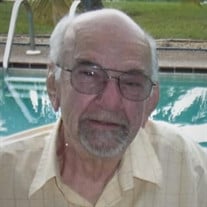 Edward Louis Cermak, 84, of Fort Myers, FL passed away peacefully Thursday, December 23, 2021 surrounded by his family at Naples Community Hospital. Formerly of Bensenville, IL he had been a resident of Fort Myers since 1994 and was a member of Grace Lutheran Church of Naples. He was born May 11, 1937 in Chicago, IL the son of the late Edward and Bessie (Lisy) Cermak. Ed graduated from Farragut High School before attending Morton Junior College. He then graduated from Illinois State University with a bachelor’s degree in education, and he earned his master’s degree in mathematics at Northwestern University. He also completed post graduate work in computer science which led to a consulting position at the Chicago Transit Authority. Mr. Cermak’s career as a math teacher started in 1960 at Lyons Township High School in La Grange, IL. He educated and befriended numerous students until his retirement in 1994. From 1971 – 1972, Ed was an International Teaching Fellow in Australia. He was an avid fisherman who also enjoyed deer and mushroom hunting. Ed was a member of the NRA and a certified firearms instructor as well as a master gardener. He was also an avid photographer; he was particularly proud of his Kodak photographs, one of which was the Kodak Picture of the Day and another photo which was used on Kodak’s website. Survivors include his beloved wife of 61 years, Anna Ruth (Witzemann) Cermak; loving daughters, Ruth (Clarke) Earley of N. Canton, OH, Susan (Todd) Rosenwinkel of Rensselaer, IN; cherished grandchildren, Glorianne (Travis) Berg, Bethany and Daniel Louis Earley; and cherished great grandson, Stephen Berg. In addition to his parents, he was preceded in death by his sister, Dolores Cermak; and great granddaughter, Mary Ellen Berg. Ed was also cherished by a loving extended family and dear friends. Visitation will be held on Sunday, January 2, 2021 from 4:00 – 8:00 PM at Chapel Hill Gardens West Funeral Home, 17W201 Roosevelt Road, Oakbrook Terrace, IL 60181. A funeral service will be held at 11:00 AM on Monday, January 3, 2021 at Chapel Hill Garden West Funeral Home. The family will receive friends from 10:00 AM until the time of the service. Burial will follow. Arrangements are being handled by Shikany’s Bonita Funeral Home, Family Owned Since 1978. ************************************************************************************************************************** Regarding attire, please note that the family grieves not as those who have no hope, and that they rejoice in Christ's resurrection and the assurance that Ed was buried with Him through baptism into death in order that, just as Christ was raised from the dead through the glory of the Father, he too may live a new life (Romans 6:4). The family's attire will reflect this Easter celebration but if you would like your attire to reflect your sorrow experienced this side of heaven, the family understands and will not look poorly on such a choice. Please come as feels most appropriate to you.

Edward Louis Cermak, 84, of Fort Myers, FL passed away peacefully Thursday, December 23, 2021 surrounded by his family at Naples Community Hospital. Formerly of Bensenville, IL he had been a resident of Fort Myers since 1994 and was a member... View Obituary & Service Information

The family of Edward Louis Cermak created this Life Tributes page to make it easy to share your memories.

Send flowers to the Cermak family.