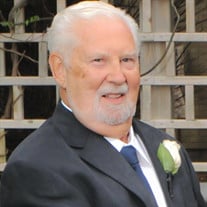 Edward “Ziggy” Ziegler, 82, of Naples, FL, died Wednesday, March 30, 2022, at Physician’s Regional in Naples, FL. Edward was born on April 24,1939 in Paterson, NJ to the late Charles Ziegler and Mabel Nolan. Edward was raised in Paterson, NJ and after graduating high school, served his country in the U.S. Navy as a corpsman in 1959 and was honorably discharged in 1961, achieving the rank of Petty Officer First Class Ex. Apprentice. He toured the West Pacific aboard the USS Fletcher DDE 445 1st Division during the Vietnam War visiting Hawaii; Yokosuka, Japan; Subic Bay, Manila, and Baguio (Camp John Hay) Philippines; Kaohsiung, Taiwan; and Hong Kong, China. Edward married Bette-Joy Hubinger in 1959 with whom he had daughter Patricia Ziegler in 1960. Edward went on to use his GI Bill at Ramapo College of NJ, earning a Bachelor of Science in Environmental Science and Business Administration in June 1983. Upon returning home from the Navy, Edward worked for the National Biscuit Company (Nabisco) as a Cookie Delivery Driver. He was also shop steward for Nabisco’s Edison Delivery Drivers at Teamsters Local 560. Edward moved from Lincoln Park, NJ and resided in Old Bridge, NJ from 1993 until his first retirement in 2004, when he moved to Naples, FL. Edward took on the role of a Field Environmental Specialist for the Florida Department of Agriculture from 2005 to 2021. Edward was an active member of the St. John the Evangelist Catholic Church in North Naples, FL. He enjoyed Jeopardy and Wheel of Fortune, playing the lottery and spending time with his Chocolate Lab, Gypsy. Edward is survived by his nephew, David Ziegler and his wife Meo Ziegler of Galloway, NJ and Cape Coral, FL; niece, Kathy O’Brien and her husband Mike O’Brien of Brigantine, NJ; niece, Lynn Minor and her significant other Luis Sanchez of Galloway, NJ; brother-in-law, Robert Hubinger and his wife Judy Rainford of Old Bridge, NJ; stepson, grandchildren, great-grandchildren, grand-nephews, grand-nieces; and his friends and coworkers. Edward was preceded in death by his wife, Bette-Joy in 2011; daughter, Patricia in 1979; sister, Joan in 1974; brothers Robert in 1985 and Charles in 2014; and sister-in-law Mary, in 2012. A Memorial Service to celebrate his life will be held at 1:30 PM on Friday, April 8, 2022 at St. John the Evangelist Catholic Church, 625 111th Avenue North, Naples, FL 34108, followed by a burial in the Memorial Garden. The link for streaming is https://saintjohntheevangelist.com/events/online-funeral-mass. A repast luncheon will be held to celebrate Edward at the Church after the Memorial Service and Burial for family and friends to share their memories and stories. To sign Edward’s guest register or to leave online condolences, please visit www.ShikanyFuneralHome.com. Arrangements are being handled by Shikany’s Bonita Funeral Home, Family Owned and Operated Since 1978.

The family of Edward A. Ziegler created this Life Tributes page to make it easy to share your memories.

Send flowers to the Ziegler family.