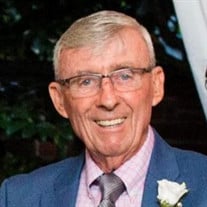 Frank Grace, 85, of Estero, FL, passed away on Monday, March 14th, 2022. Formerly of Ft. Mill, SC, he had been an Estero resident since 2014. He was born December 27, 1936 in Brooklyn, New York, the son of Patrick and Frances Grace. For those who really knew Frank, would describe him as one of the most kind and caring men they had ever met. He viewed his life to be in service of others, starting his young adult life as a New York City Firefighter, which was ended short due to an in-service injury preventing him from continuing. In his heart and mind, he was always a firefighter, and quickly redirected his need to serve others to his friends and family, particularly his wife Carol through 54 years of marriage. He became the eyes for Carol as she suffered from blindness, but he took this on as his purpose for being. He was always there for his family and always offered, what would be described as, simple and clear solutions. Mr. Grace is survived by his beloved children, Francis (Luisa) Grace of Mystic, CT, Timothy (Denise) Grace of Naples, FL, Maryanne (Patrick) Morris of Estero, FL and Kevin Grace of Holtsville, NY; nine cherished grandchildren, Heather, Amanda, Elizabeth, Patrick, Patrick, Emily, Rebecca, Alicia and Matthew; and two great grandchildren; Lucy and Rylie Smart. A memorial will be held for family and friends at the home of his daughter Maryanne at 9229 Lanthorn Way, Estero, FL on Saturday, March 19th from 12:00 PM - 3:00 PM. In lieu of flowers, the family suggests memorial contributions be made to the Alzheimer’s Foundation of America at alzfdn.org. To sign Frank's guest register or to leave online condolences, please visit www.ShikanyFuneralHome.com. Arrangements are being handled by Shikany’s Bonita Funeral Home, Family Owned and Operated since 1978.

The family of Francis (Frank) X. Grace created this Life Tributes page to make it easy to share your memories.

Send flowers to the Grace family.