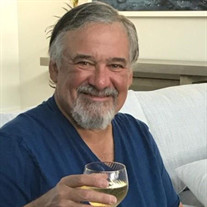 Frederick James Costello, 61, of Bonita Springs, FL died suddenly on July 2, 2021. Fred will be best remembered for his quick smile, his deep devotion to family, his love of song, and his unparalleled knack for maintaining countless friendships... View Obituary & Service Information

The family of Frederick James Costello Jr. created this Life Tributes page to make it easy to share your memories.

Send flowers to the Costello family.