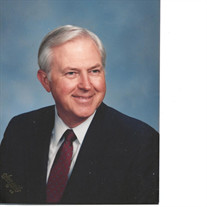 Gary E. VandenBerg, 82, of Naples, FL returned to his heavenly home early Saturday morning, January 22nd, 2022. He was born in Dowagiac, MI and was the son of the late Gerrit and Minnie (Sikkema) VandenBerg. He married his high school sweetheart, Ardith D. Taylor in 1958 and together they celebrated 63 years of marriage. His devotion to family, support for those around him, faith in God and immersion into the Christian community was a large part of his life and provided him peace while preparing to meet his Lord and Savior. Gary was a proud graduate of Decatur High School at the age of 16, followed by Kalamazoo College in 1963 where he earned his Bachelor of Arts degree in Chemistry. He continued his graduate work in Business at Western Michigan University, and life-long learning in organizational leadership at various institutions. The majority of Gary’s career was at the Upjohn Company (31 years) and concluded at HumanEx Ventures, both in Kalamazoo, MI. His love for young people and sports led to a significant role in youth sports where he served as football, basketball and baseball coach for over 20 years. He received several honors and awards from the Optimists of America for his contributions and was seen as a “mentor” for many, including at-risk youths. Gary also served as President of the Mattawan Consolidated School Board of Education and was instrumental in leading the school to one of the top systems in the region and throughout Michigan. Gary’s love for education, youth and making people around him better were at the core of his being and were only surpassed by the love for his family. He was a dedicated and devoted family man who taught them the meaning and importance of being a good person and doing right by others. He was a gracious, kind, intelligent and selfless person who always saw the positives in people and always put others first. He always had time for others, was always available to help when needed and went out of his way to spread his joy and happiness. We were blessed to have him in our lives as a father and a husband. He will be missed, but never forgotten…..his spirit will live on in those who he touched. In addition to his wife, Ardith, he is survived by two sons, Kyle of South Haven, MI, and Kevin (Nikki) VandenBerg of Pulaski, NY; grandchildren Leah VandenBerg of Camillus, NY, and Joshua (Jessica) VandenBerg of Mattawan, MI; great grandchildren Keilani VandenBerg and Killian VandenBerg both of Mattawan, MI. To sign Gary’s guest register or to leave online condolences, please visit www.ShikanyFuneralHome.com. Arrangements are being handled by Shikany’s Bonita Funeral Home, Family Owned and Operated since 1978.

Gary E. VandenBerg, 82, of Naples, FL returned to his heavenly home early Saturday morning, January 22nd, 2022. He was born in Dowagiac, MI and was the son of the late Gerrit and Minnie (Sikkema) VandenBerg. He married his high school sweetheart,... View Obituary & Service Information

The family of Gary E. VandenBerg created this Life Tributes page to make it easy to share your memories.

Gary E. VandenBerg, 82, of Naples, FL returned to his heavenly...

Send flowers to the VandenBerg family.