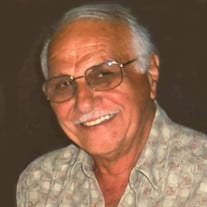 George L. Barbounis 86, of Bonita Springs, FL passed away peacefully on Friday, August 21, 2020 at his residence with the love of his life, his wife, Katerina (Kate), of 53 years by his side. George was born on March 17, 1934 in Kamares, Patras, Greece. He was the son of the late Leonidas D. and Aggeliki (Eliopoulos) Barbounis. He had been a resident of Bonita Springs since 2003 coming from Allentown, PA. After graduating high school in Patras, Greece, he served in the Greek Merchant Marines which led him to travel around the world. After meeting and marrying Kate in Greece, they immigrated to the United States in 1967. George had a passion for cooking and became a self-taught chef. He owned and operated My Three Sons Diner and then the Anna Maria Restaurant in Allentown, PA until his retirement. He was a member of St. Nicholas Greek Orthodox Church in Bethlehem, PA and St. Katherine Greek Orthodox Church in Naples, FL. He was also a member of the AHEPA organization, Lehigh Chapter 60 in Allentown, PA. He is survived by his beloved wife, Katerina (Sofikitou) Barbounis, of Bonita Springs, FL and their three sons; Leonidas G. (Anna) Barbounis, of Allentown, PA; Dr. Constantine G. (Nancy) Barbounis, of Naples, FL, and Vasili G. (Lisa) Barbounis of Philadelphia, PA and a very proud grandfather of Haroula I. Barbounis, George L. Barbounis, George C. Barbounis, Peter C. Barbounis, Olivia K. Barbounis and George V. Barbounis. He was preceded in death by his parents, and one brother, Nikolas, and two sisters, Vasiliki and Constantina of Greece. Funeral services for George will be held Monday, August 24, 2020 at 10:00 AM at St. Katherine Greek Orthodox Church 7100 Airport Pulling Rd., Naples, FL 34109. The family will be receiving friends at the church from 9:00 AM until the time of the service. Burial will follow at Palm Royale Cemetery, Naples, FL. In accordance with CDC guidelines, masks will be required and social distancing will be in effect. In lieu of flowers and in George’s loving memory, a remembrance in his name would be greatly appreciated to support St. Katherine Greek Orthodox Church 7100 Airport Pulling Rd., Naples, FL 34109 or St. Nicholas Greek Orthodox Church 1607 W. Union Blvd, Bethlehem, PA 18018. To sign his guest book or to leave your personal condolences to the family, please visit www.ShikanyFuneralHome.com. Arrangements are being handled by Shikany’s Bonita Funeral Home Family Owned and Operated Since 1978.

George L. Barbounis 86, of Bonita Springs, FL passed away peacefully on Friday, August 21, 2020 at his residence with the love of his life, his wife, Katerina (Kate), of 53 years by his side. George was born on March 17, 1934 in Kamares, Patras,... View Obituary & Service Information

The family of George L. Barbounis created this Life Tributes page to make it easy to share your memories.

Send flowers to the Barbounis family.