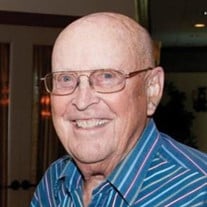 Harvey Haines 92, of Avon Park and a former longtime resident and influential leader of Bonita Springs died on September 8, 2021 at his daughter’s residence in Bonita Springs. He was born on March 27, 1929 in Newton, New Jersey a son of the late Herbert and Hanna (Cope) Haines. He had been a resident of Bonita Springs since 1962 coming from West Chester, PA. He was a graduate of the Olney Friends Boarding School in Barnesville, OH where he met his future wife, Ferne Kissick. Harvey and Ferne were married on June 23, 1950 in Richmond, IN. After moving to Bonita Springs he began his 50-year career when he opened Haines Appliances and Refrigeration. He was active in the company until his retirement in 2004. He was very influential in the growth and development of Bonita Springs. Harvey was one of the original incorporators of what was then the Bonita Springs Water System, Inc. back in 1969. He was also a charter member of the new Company’s Board of Directors. Harvey served on the Board for 37 years retiring in 2006. He served as President of BSU in 1991 when the company got into the wastewater business. In 1965, he was part of the group that formed the Bonita Springs Volunteer Fire Department. He also served on the Fire Commission and from 1981 thru 1986 served as Chairman. He retired from the Fire Commission in 1998. He was a member of the Bonita Springs Chamber of Commerce and served on the Board of Directors. He was also a member of the Florida Flywheelers, an antique tractor club. He is survived by his loving wife of 71 years, Ferne Haines; son, Thomas H. Haines, III and his wife Wendy of Ft. Myers, FL; daughter, Kathryn L Haines and her companion, Juli Klein of Bonita Springs, FL; 6 grandchildren and 11 great-grandchildren. He was preceded in death by his parents, his brother, Alfred Zebedee Haines and his sister, Helena Cope Haines. A Memorial Service to celebrate his life will be held on Saturday, September 18, 2021 at 3:00 PM at Shikany’s Bonita Funeral Home 28300 So. Tamiami Tr., Bonita Springs. The family will receive friends at the funeral home from 2:00 PM until the time of service. Memorial contributions in his memory may be made to the Olney Friends School 61830 Sandy Ridge Rd., Barnesville, OH 43713 or to the West Grove Friends Meeting P.O. Box 7, West Grove, PA 19390. To sign his guest register or to leave online condolences please visit www.ShikanyFuneralHome.com. Arrangements are being handled by Shikany’s Bonita Funeral Home Family Owned and Operated Since 1978.

Harvey Haines 92, of Avon Park and a former longtime resident and influential leader of Bonita Springs died on September 8, 2021 at his daughter&#8217;s residence in Bonita Springs. He was born on March 27, 1929 in Newton, New Jersey a son of... View Obituary & Service Information

The family of Harvey Haines created this Life Tributes page to make it easy to share your memories.

Harvey Haines 92, of Avon Park and a former longtime resident...

Send flowers to the Haines family.