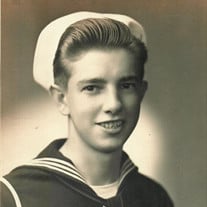 Henry J. Thiesen, 94 of Naples, FL passed away on January 21, 2022. Born in New York City, NY Henry was a son of the late Louis G. and Anna (Kemeter) Thiesen. Henry was a proud Veteran of the United States Coast Guard, serving in WWII. He... View Obituary & Service Information

The family of Henry J. Thiesen created this Life Tributes page to make it easy to share your memories.

Send flowers to the Thiesen family.