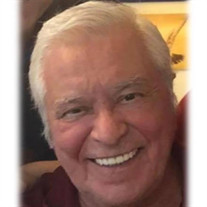 James Bogeazis, 84, of Estero, Florida passed away on March 11, 2021. James was born in Flushing, NY, the only son of George and Helen Bogeazis (née Koukloumbakos). He had been a resident of Pelican Sound in Estero, Florida for over twenty years. A self-made man, James graduated from CUNY Baruch College in New York and went on to open ‘The Bankers Register’, a successful recruiting firm in New York City, which he ran for 40 years before retiring to Florida. In his retirement years, James enjoyed investing and trading in the stock market. James was a kind and loving partner to his late longtime companion, Anne Fertel, and an extraordinary father to his daughters, Christine Lagalante and Maria Lanci of Long Island, NY. Aside from his daughters, he leaves behind two sons-in-law, Louis and Christopher; stepdaughters, Lisa Meade and Cheryl Lasak and her husband Jeff; nine beloved grandchildren - Elle, Daniel, Matthew, James, Alex, Alexis, Josh, Sean and Jeremy; and a sister, Leah Yacavone. James was preceded in death by his son, George Bogeazis, who passed away in 1986, and by his sisters, Jenny Quatela and Debbie Demetri. James was the most generous of human beings. His wisdom, sense of humor and zest for life made him a joy to be around. His favorite saying was “Is everybody happy?” and James truly lived that sentiment. He was the life of the party wherever he went. His bright spirit guided him through difficult times and was an inspiration to his family and friends. He will be greatly missed. James’ funeral services will be held Tuesday, March 16, 2021 at 11:00 AM at St. Katherine Greek Orthodox Church 7100 Airport Rd., Naples, FL 34109. The family will receive friends at the Church from 10:00 AM until the time of the service. Burial will follow at Palm Royale Cemetery 6780 Vanderbilt Rd., Naples, FL 34119. To honor his memory, the family suggests that memorial donations be made to St. Jude Children’s Research Hospital 501 St. Jude Place, Memphis, TN 38105-9959. If you wish to sign his guest register or to leave online condolences please visit www.ShikanyFuneralHome.com Arrangements are being handled by Shikany’s Bonita Funeral Home Family Owned and Operated Since 1978

James Bogeazis, 84, of Estero, Florida passed away on March 11, 2021. James was born in Flushing, NY, the only son of George and Helen Bogeazis (née Koukloumbakos). He had been a resident of Pelican Sound in Estero, Florida for over twenty years.... View Obituary & Service Information

The family of James Bogeazis created this Life Tributes page to make it easy to share your memories.

Send flowers to the Bogeazis family.