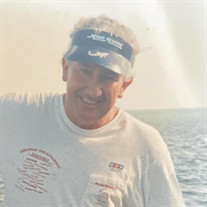 James (Jim) Evan Cline went home to be with the Lord on Sunday, January 9th, 2022 following a year-long battle with heart disease. Jim was born and raised in John’s Creek, Kentucky in 1938 and moved to Auxier, Kentucky in 1948. He was one of two children born to James Beckham Cline and Lakie (Williamson) Cline. Jim played basketball for and graduated from Auxier High School as Valedictorian in 1956. He then graduated with a B.A. in English Literature from Pikeville College in 1960 and later completed a Master’s degree in Biology and Chemistry from Middle Tennessee State. Jim married Frances (Vernon) Cline in 1960. In August 1961, after teaching high school in eastern Kentucky, Jim and Frances moved to Fort Lauderdale, Florida where they had three children (Natasha, Mark, and Jon). Jim taught high school biology for six years and worked at Sears part time. While working at Sears, Jim struck up a friendship with some of the Allstate agents who worked in a booth there. In 1967, Jim started a 32-year career as an Allstate Insurance Agent. He was loved and respected by his clients, fellow agents, and managers. In 1974, Jim was honored as the Allstate Southeast Conference Chairman. He also earned the Allstate Honor Ring multiple times in his career. Jim met Susan (Shihadeh) Cline and they married in 1977. Outside of work, Jim developed a passion for racing cars. He raced Formula Vees from 1968-1970 all over Florida. Jim had a great love of the water. He loved to fish for bass on the lakes of Central Florida and the Everglades, to sail off the waters of Fort Lauderdale, and to troll off the waters of Key Largo. Jim also understood the importance of physical exercise – he loved to walk and to swim. Jim was a man greatly committed to his family. He was a loving husband, father, father-in-law, grandfather, great-grandfather, and uncle. He provided well for all of his family – spiritually, emotionally, mentally, and financially. Jim was a man of great faith who trusted in Jesus as his Lord and Savior. He prayed every day (especially for all his relatives) as he walked in the mornings. He served as a Sunday School prayer leader, a greeter and an usher at the various churches he attended. Jim was loved and respected for his sound wisdom, his Hillbilly simplicity, his tender compassion, his incredible generosity, and his humility. He never forgot his roots. His approach to life is summed up in Micah 6:8, “He has shown you, O man, what is good; and what does the LORD require of you but to do justly, to love mercy, and to walk humbly with your God?” Jim was predeceased by his sister Uldeen Beddow of Fort Lauderdale, FL and his first wife Frances. Jim is survived by his wife of 44-years Susan (Shihadeh) Cline of Bonita Springs, FL; daughter Natasha (Cline) Shirley of John’s Creek, GA, and her husband Greg, and their children, Elizabeth Beaver (husband Jonathan and son Samuel James) and Jamie Stumbo (husband Joshua); his son Mark Cline of Oviedo, FL and his wife Mary, and their children Michelle, Natalie, and Kristin; his son Jon Cline of Windermere, FL and his wife Janine and their children Ryan, Lauren Jordahl (husband Dan), and Matthew; and his step-daughter Bambi (McCracken) Metscher of Casper, WY and her husband Bill, and their children Billy and Robby. He is also survived by his two nephews Bill Bussey of Houston, TX and James Bussey of Harvest, AL. Also cousin Robert Brown of Nipomo, CA. A funeral procession, graveside service and burial will be held at the Bowen-Donaldson Funeral Home/Oak Ridge Cemetery in Tifton, GA on January 15th at 1:00 PM. A Celebration of Life will be held on Saturday, February 12th, from 12 to 1 PM at First Baptist Church Naples. In lieu of flowers, donations can be made to the Christian Appalachian Project (https://www.christianapp.org) in Memory of Jim Cline. To sign Jim's guest register or to leave online condolences, please visit www.ShikanyFuneralHome.com Arrangements are being handled by Shikany's Bonita Funeral Home & Crematory. Family Owned and Operated Since 1978

James (Jim) Evan Cline went home to be with the Lord on Sunday, January 9th, 2022 following a year-long battle with heart disease. Jim was born and raised in John&#8217;s Creek, Kentucky in 1938 and moved to Auxier, Kentucky in 1948. He was... View Obituary & Service Information

The family of James E. Cline created this Life Tributes page to make it easy to share your memories.

James (Jim) Evan Cline went home to be with the Lord on Sunday,...

Send flowers to the Cline family.