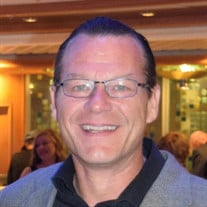 James W. “Jay” Collins, Jr. 53, of Naples, FL and a former resident of Bensenville, IL died unexpectedly on Thursday, August 20, 2020 as the result of a heart attack which caused a car accident. Jay was born on March 23, 1967 in Blue Island, IL, the son of James W. Sr. and Laurene D. (née Nelson) Collins. He had been a resident of Naples since 2007. In 1985, Jay graduated from Immaculate Conception High School in Elmhurst, IL. He would later attend St. Louis College of Pharmacy in St. Louis, MO where, in 1991, he earned his Bachelor of Science in Pharmacy and was a member of the Delta Sigma Theta Pharmaceutical Fraternity. After college he began his career with some of the major retail pharmacies such as Walgreens, CVS and Jewel-Osco in IL. After moving to Naples, he worked at Costco in the pharmacy. Jay was equally gifted in both sciences and arts. He had a talent for woodworking, art, painting and music. Jay’s love of music was his life-long passion. Every day he would play the guitar and practice or just jam with friends and years ago was the lead guitarist in a band in Illinois called Planet Von. Jay was a trusted and loyal friend to many and a life-long lover of Diet Coke. He is survived by his two children, Emily L. Collins and Bradley J. Collins of Naples, FL; his former wife and the mother of his children, Bridgett Hofstetter of Naples, FL; his mother, Laurene D. Collins of Elmhurst, IL; his sister Nancy L. Shanahan and husband Bill of Bartlett, IL; sister Lisa M. McComb of Elmhurst, IL; and his nieces and nephew, Katie and Morgan Shanahan, Lauren and Jack McComb. A Memorial Mass to celebrate his life will be held on Thursday, August 27, 2020 at 1:00 PM ET at St. Agnes Catholic Church, 7775 Vanderbilt Beach Rd., Naples, FL 34120 with Fr. Michael P. Orsi, officiating. In lieu of flowers, memorial contributions can be made to an Educational Fund established for his two children at GoFundMe, https://gf.me/u/ytqd69. To sign his guest registry or to leave your personal condolences to the family, please visit www.ShikanyFuneralHome.com. Arrangements are being handled by Shikany’s Bonita Springs Funeral Home Family Owned and Operated Since 1978.

The family of James W. "Jay" Collins created this Life Tributes page to make it easy to share your memories.