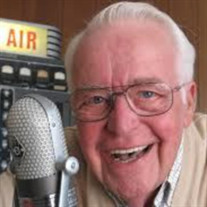 James W. Ramsburg 85, of Estero died Monday, January 18, 2021 in Ft. Myers, FL. He was born on June 27, 1935 in Minneapolis, MN the only child of the late Walter V. and Ellen (Warren) Ramsburg. He had been a resident of Estero for the past 22 years coming from Minneapolis. Mr. Ramsburg spent 50 years in the radio and advertising industry. His own lifetime fascination with radio began during WWII when he was a “latch-key kid” while his widowed mother worked as a bookkeeper. Home alone, the radio became his baby-sitter, mentor, and companion. A product of the University of Minnesota School of Journalism, in the 1950s he started his radio career at WLOL-St. Paul followed by WDGY-Minneapolis and KWKY-Des Moines. He then worked at WPTR-Albany and KMBC-Kansas City. He eventually wound up as assistant program director and worked a weekend show during the “two-way” Talk format at KLAC in Los Angeles, CA. After leaving KLAC in 1968, Jim returned to his hometown of Minneapolis, to become program director at KSTP until 1974. Upon leaving radio, he and his wife Patty founded a successful advertising agency, Ramsburg Advertising & Media Services (RAMS). Jim and Patty retired in 1998 and they split their time between homes in Balsum Lake, Wisconsin and Estero, Florida. Jim was also very active in the voiceover business. Jim was inducted in the Minnesota Broadcasters Hall of Fame. He also wrote a book, Network Radio Ratings, 1932-53 and was a radio historian. He is survived by his loving wife Patricia L. Ramsburg of Estero, FL; daughter, Tricia E. Ramsburg of Wilmington, NC; son, Todd M. Ramsburg and his wife, Lori of Eden Prairie, MN; two grandchildren, Alaina Johnson and James Todd Ramsburg and one great-grandson, Toren Johnson. In accordance with his wishes, there will be no services. To sign his guest register or to leave online condolences please visit www.ShikanyFuneralHome.com Arrangements are being handled by Shikany’s Bonita Funeral Home Family Owned and Operated Since 1978.

The family of James W. Ramsburg created this Life Tributes page to make it easy to share your memories.

Send flowers to the Ramsburg family.