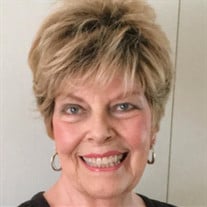 Janet Sue Secrest, 80, of Estero, FL, passed away on Tuesday, October 19th, 2021. Janet was born in Glen Dale, WV on August 7, 1941, daughter of the late Benjamin Franklin and Genevieve Lucy Myers. She graduated from Linden McKinley High School in Columbus, OH and attended Asbury College in Wilmore, KY. Janet’s legacy is a lifetime devoted to her family. She was married to William T. Secrest on September 10th, 1960, and they were married for 61 years. Janet is survived by her husband Bill and her three children and their spouses, John (Jessica), Jim (Shawn), Susan (Mike Eldredge), as well as seven grandchildren, Hunter (Carolina), Emma (Kai Mauga), Sophia, Jacob, Michael, Stephen, and Ashley. She was also able to greet her first great grandchild, Evelyn, before she passed, which made her happy to be called GiGi. She is also survived by her sisters Jane Graham, and Linda Taylor (Bob). Janet was a devoted follower of Jesus Christ. She invested many years serving in Bible Study Fellowship and most recently enjoyed her church Bible study, Wednesday in the Word. She loved music and sang for 12 years in the local Singing Brooks Choir. Janet was the cheerleader to everyone in her life. She remembered every story and person and loved to retell the memories, especially to encourage and remind her family how special they are. Her joy, faith, and unconditional love will be greatly missed! A memorial service will be held at 3pm on Sunday, October 31st at First Presbyterian Church of Bonita Springs. Pastor Doug Pratt and Pastor John Secrest will be officiating. Her service will be live streamed and can be viewed at https://fb.me/e/PYZ5t9cM A memorial will also be held in her hometown of Columbus, Ohio on Friday, November 5, 2021 at 3:00 PM at Sunset Cemetery, 6959 West Broad Street, Galloway, OH 43119. In Lieu of flowers, memorial donations can be given to Compass Church Naples https://compassnaples.churchcenter.com/giving/to/janet-secrest-memorial-fund or First Presbyterian Church of Bonita Springs https://fpcbonita.org/give/ Arrangements are being handled by Shikany's Bonita Funeral Home, Fmaily Owned Since 1978.

The family of Janet Sue Secrest created this Life Tributes page to make it easy to share your memories.