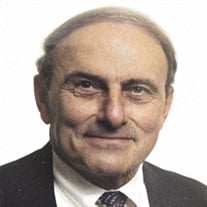 Jasper John Maggio passed away peacefully surrounded by his family on January 31, 2021. He was born September 11, 1933 to his parents, Gasper J. Maggio and Josephine L. Maggio (Montefusco) who predeceased him in death. He is survived by his adored wife Mary (Hummel) of 42 years, two sons J and Kristin (Coulas) Maggio, James and Kelly (Rice) Maggio and five loving grandchildren Madeline Mary, Jasper John IV, John (Rocco), James (Duke) and Jack (Edward) Maggio. He is also survived by a sister Carol Marie Gridley and one niece Debra Johnson. He attended Spalding Institute and earned his BS degree at Bradley University in Peoria and his MBA at the University of Chicago, IL. He served in the U.S Marine Corps before joining the IBM Corporation in Peoria and Bloomington, IL. His IBM career brought him to Chicago and River Oaks, IL and eventually led him to South Bend, IN where he was the Branch Manager for South Bend and Fort Wayne, IN He was promoted to Boston, MA as a Vice President of the IBM Distribution Division where he retired early and joined NYNEX Corporation as the Vice President in Chicago, IL. He spent the next several years with IBM reseller organizations, Computerland and XLDatacomp and eventually, with three partners, formed The Jannon Group as Executive Vice President before his retirement in 2000. He and his wife Mary moved to the Copperleaf Golf Club in Bonita Springs, FL in 2005 where he served on the Board of Directors and President. Throughout his career, he served in a number of volunteer and philanthropic roles including the President of the Junior Chamber of Commerce, where he is listed in the 1965 Outstanding Young Men of America, Campaign Chairman for the United Way and March of Dimes, Board Member of the NAACP and President of the South Bend Country Club. While his list of professional accomplishments is long, his most proud moments came as a father and grandfather where he was affectionately known as “Papa.” A Mass of Christian Burial will be celebrated at 1:00 PM on Friday, February 5, 2021 at Our Lady of Light Catholic Community 19680 Cypress View Dr., Fort Myers, FL 33967. Burial will follow in the church memorial garden. In lieu of flowers, donations may be sent to Our Lady of Light Parish, 19680 Cypress View Dr., Fort Myers, FL 33967; The Copperleaf Foundation, 23101 Copperleaf Blvd., Estero, Fl 34135; or to your favorite charity. To sign his guest register or to leave online condolences please visit www.ShikanyFuneralHome.com Arrangements are being handled by Shikany's Bonita Funeral Home Family Owned and Operated Since 1978.

Jasper John Maggio passed away peacefully surrounded by his family on January 31, 2021. He was born September 11, 1933 to his parents, Gasper J. Maggio and Josephine L. Maggio (Montefusco) who predeceased him in death. He is survived by his... View Obituary & Service Information

The family of Jasper John Maggio Jr. created this Life Tributes page to make it easy to share your memories.

Jasper John Maggio passed away peacefully surrounded by his family...

Send flowers to the Maggio family.