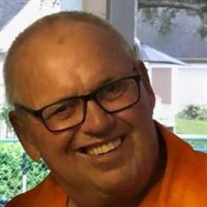 Jerome “Jerry” Perlberg, 79, of Estero, Florida passed away peacefully Monday, September 27, 2021 in Joanne’s House of Hope Hospice. Jerry was born on June 4, 1942 in Milwaukee, Wisconsin to Isadore and Alyce (Hartman) Perlberg. Jerry grew up in Rhinelander, Wisconsin with his parents and 3 brothers. After graduation he enlisted in the Air Force. Upon completion of his duty he returned to Rhinelander and married the love of his life, Mary Lou. Jerry took a job in Milwaukee at Allen-Bradley. Jerry and Mary Lou raised their kids in Greenfield, WI where he was active in his kids’ little league as a coach and manager. The kids on the teams loved him and to this day refer to him as “coach”. In 2002, Jerry retired from Rockwell International where he worked as an Electrical Technician for over 30 years. After retirement, Jerry and Mary Lou built a home and relocated to Harrisville, Wisconsin where they made many new friends who they call family. They took countless trips all over the United States and Central America. Winters were spent in Florida and summers in Wisconsin. They loved Florida so much they decided to live there year-round and bought a villa at Fountain Lakes in Estero. Jerry and Mary Lou would return to Wisconsin during the summer and fall to enjoy time with family, watch the grandkids play sports, and cheer on their beloved Brewers, Packers and Badgers. Jerry especially loved the fall; he was an avid outdoorsman and bow hunter. Jerry is survived by his loving wife, Mary Lou. They would have celebrated their 56th wedding anniversary October 2, 2021. Also surviving are sons, Todd (Vicki) Perlberg and Troy (Sherry) Perlberg; daughter, Gina (Russ) Vinkavich; grandchildren, Tony (Cori), Justin (Karisa), Carly, Brianna, Zach, Michael, Ethan and Ava; great-granddaughter, River; brothers, Jack (Lollie) Perlberg and Jim (Shirley) Perlberg; sister-in-law, Pat Perlberg; brother-in-law, John (Jennifer) Phillips; and numerous friends and family. He was preceded in death by his parents, Isadore and Alyce (Hartman) Perlberg; brother, Denny Perlberg; and “like a brother” Cousin, Sparky Perlberg. In lieu of flowers family suggests memorial contributions to Joanne's House at Hope Hospice (https://hopehcs.org/donate/). There will be a Celebration of Life on October 16, 2021 at Crossroads Chateau in Montello, Wisconsin from 1:00 PM to 4:00 PM. A second Celebration of Life will be held at a later date at Fountain Lakes. To sign Jerry’s guest register or to leave online condolences, please visit www.ShikanyFuneralHome.com. Arrangements are being handled by Shikany’s Bonita Funeral Home and Crematory, Family Owned and Operated since 1978.

The family of Jerome "Jerry" Perlberg created this Life Tributes page to make it easy to share your memories.

Send flowers to the Perlberg family.