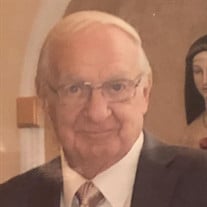 John L. Heller, 87 of Naples, FL passed away Thursday, November 18, 2021 at Naples Community Hospital. He had been a seasonal resident of Naples for the past 35 years, also calling Boston, MA home. John was born July 26, 1934 in Chicago, IL a son of the late Leo and Beatrice (Beeson) Heller. Mr. Heller was a veteran of the United States Marine Corps, serving from 1953 – 1956. His career was spent as an electrical engineer for Commonwealth Edison in Chicago designing underground systems, retiring in 1992. He was an avid golfer who enjoyed spending time with his wife Jeanne on the beach. Jeanne and John spent the better of almost 40 years by each other’s side. John was most content sitting at home in his favorite chair and having Jeanne bring him a sandwich. He was a sports enthusiast and loved the Cubs particularly before they installed lights at Wrigley. Mr. Heller was also a member of the VFW and participated in the Veteran’s Day parade every year. John was a man of few words within an enormous loving family with no shortage of words. Survivors include his beloved wife, Jeanne A. (Brides) Heller; loving children, Michael (Terri) Heller, Brian (Julie) Coyle, Jay (Allison) Coyle; grandchildren, Alex Heller, Abbey Heller, Andy Heller, Patrick (Lee) Coyle, Ryan Coyle, Erin (Michael) Perotta, Regan (Edward) Yakubian, Molly (Chris) Follett, Colleen (Gregory) Gangitano, Keleigh (Michael) Doherty, Connor Coyle and Liam Coyle; and great grandchildren, Jack, Quinn, Kendall, Payton, Cameron, Landyn, Piper, Edward, Reese, Collins, Liam and Aubrey. In addition to his parents, he was preceded in death by his children, Colleen Greene and Colin & daughter in law Gale Coyle. A Mass of Christian Burial will be celebrated at St. John the Evangelist Catholic Church at a later date and will be announced. Arrangements are being handled by Shikany’s Bonita Funeral Home, Family Owned Since 1978.

John L. Heller, 87 of Naples, FL passed away Thursday, November 18, 2021 at Naples Community Hospital. He had been a seasonal resident of Naples for the past 35 years, also calling Boston, MA home. John was born July 26, 1934 in Chicago, IL... View Obituary & Service Information

The family of John L. Heller created this Life Tributes page to make it easy to share your memories.

Send flowers to the Heller family.