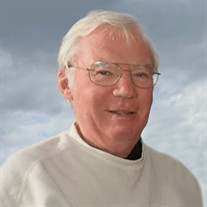 John Michael Joyce was born in Manhattan on April 7th, 1940 and died on March 27th, 2022 in Bonita Springs, FL. The son of Irish immigrants, John grew up in the Bronx in a tight-knit community. His favorite childhood memories were playing stickball in the street, watching Yankees games through the fence and causing trouble with his neighborhood friends. John attended All Hallows High School in the Bronx, graduating in 1957, and promptly landed a job in the mailroom of General Motors in New York City. Discovering a fondness for business, he applied to Columbia University, from which he graduated in 1966 with a BA in Economics. He went back to work at GM and held various positions in finance including management roles in Brazil and Germany, Ohio, Michigan, and Indiana. He retired in 1998 as the Chief Financial Officer of the Delco Electronics Division after over 40 years with GM. John met Patricia (Pat) Van Name at Gleason’s Manhattan bar in 1973. After dating in New York, he left Pat behind for a work assignment in Brazil. Quickly realizing the error of his ways, he invited Pat to join him in Brazil and they were married on January 3rd, 1976. John and Pat moved to Bonita Bay in 1997 and enjoyed many years of golf, sunshine, travel and friends. Retirement allowed John to spend more time on some of his favorite hobbies including reading newspapers cover to cover, listening to Irish music and doo-wop, engaging in discussions of current events and rooting for the New York Giants and the Yankees. In 2004 John embraced his love of politics, running for and serving on the Bonita Springs City Council for four years. John’s greatest loves were his wife and daughters, and he discovered and relished in the delight of being a Pop-Pop in recent years. He found joy in building and maintaining relationships with friends around the world and especially loved his trips to Ireland. He was deeply grateful for all that he had and would tell anyone who would listen how much he loved his life. John is survived by Pat, his wife of 46 years, daughters Katie (Dennis Abdelnour) and Meaghan (Brian Taussig), and grandchildren Maeve, Louis and Cora. John will be remembered fondly and dearly missed by his sister Mary (John) Zerbo, his nieces and nephews and many adoring friends. John was preceded in death by his parents Michael and Agnes (Clossick) Joyce. A funeral mass will be celebrated on Monday, April 4, 2022 at 1:00 P.M. in St. John the Evangelist Catholic Church, 625 111th Ave N, Naples, FL 34108. A reception will directly follow at Bonita Bay Club 26660 Country Club Dr, Bonita Springs, FL 34134 In lieu of flowers, please consider a donation to: Joanne’s House - Hospice House https://hopehcs.org/ Hope Development Department 9470 HealthPark Circle Fort Myers, FL 33908 Michael J Fox Parkinson’s Research Foundation. https://www.michaeljfox.org/ Donation Processing The Michael J. Fox Foundation P.O. Box 5014 Hagerstown, MD 21741-5014 To sign John’s guest book or to leave on line condolences, please visit www.ShikanyFuneralHome.com Arrangements are being handled by Shikany’s Bonita Funeral Home & Crematory Family Owned and Operated Since 1978.

John Michael Joyce was born in Manhattan on April 7th, 1940 and died on March 27th, 2022 in Bonita Springs, FL. The son of Irish immigrants, John grew up in the Bronx in a tight-knit community. His favorite childhood memories were playing stickball... View Obituary & Service Information

The family of John Michael Joyce created this Life Tributes page to make it easy to share your memories.

Send flowers to the Joyce family.