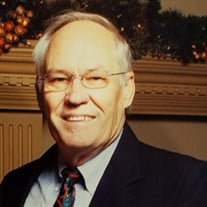 After living a blessed life filled with love, family and friends, John passed away February 23, 2022, at Hope Hospice in Bonita Springs. John was born December 7, 1935 in Limestone County, Alabama, the oldest of 9 children. He graduated high school where he excelled in studies and sports. Upon graduation, he enlisted in the Air Force where he flew on B-52 Bombers, played baseball and travelled the world. After the Air Force, John graduated from Florence State College with a degree in chemistry. He joined DuPont Company and enjoyed several years in their Explosives Products Department, traveling throughout the country in both technical and sales positions. On the way, he developed several new product applications and was frequently treated as the “go to” guy, providing trouble shooting expertise during explosive mishaps. When DuPont sold their explosives business late in John’s career, as Vice President Sales and Product Development, he was key in starting up a new company and developing it from nothing to a multi-million dollar business. John was a family man, avid reader, especially history, as well as, avid sports fan where he followed Alabama Crimson Tide and North Carolina Tar Heels. He was a Christian and member of Summit Church, Estero. He was a unique individual who never met a stranger. He had a soft side for those in need and responded accordingly. John is survived by his loving wife, Joann, of 49 years; sons, John Christopher (Judi Mitchell) of Orlando, FL and Brian Michael (Stephanie Norton) of Fort Mill, SC; and grandchildren, Taylor Martins (Fabrico), Jordan and Genevieve Grace. He is survived by 3 sisters, Julia L. Brewer, Angela L. Jones, Malea L. Reddish (Carl); one brother, Paul “Bud” Lang (Linda); sister-in-laws, Juanita Lang, Ann Lang, Frances Lang; brother-in-law, Basil Ceravalo; special niece, Jaida Allen; and long-time friend John McAdoo. He was presided in death by his parents, Ida Mae Lang and John Clinton Lang of Huntsville AL, as well as siblings, Linda L. Lewis, Gary L. Lang, Charles D. Lang and Frank W. Lang. There will be a spring service in Decatur, Alabama followed by inurnment in Rosedale Cemetery, Martinsburg, WV. Any desired expression of condolence may be made to Joanne’s House at Hope Hospice, 27200 Imperial Parkway, Bonita Springs, FL 34135, where he spent his last days treated with love and dignity. To sign John’s guest register or to leave online condolences, please visit www.ShikanyFuneralHome.com. Arrangements are being handled by Shikany’s Bonita Funeral Home, Family Owned and Operated since. 1978.

After living a blessed life filled with love, family and friends, John passed away February 23, 2022, at Hope Hospice in Bonita Springs. John was born December 7, 1935 in Limestone County, Alabama, the oldest of 9 children. He graduated high... View Obituary & Service Information

The family of John Dee Lang created this Life Tributes page to make it easy to share your memories.

After living a blessed life filled with love, family and friends,...

Send flowers to the Lang family.