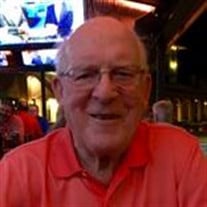 Joseph Beauregard, devoted husband, wonderful father, respected doctor, and friend to all he knew, passed away on April 2nd at the age of 94. Joe was fortunate to spend his last days surrounded by family, and in typical fashion, he left without drama or fanfare. To say the man had a strong constitution would be a great understatement. Joe’s strength of both heart and mind was evident right up until the end. Born in 1927 to Arthur and Marie Beauregard in St. Albans, Vermont, Joe grew up tending to the animals on their small subsistence farm with his mother and two brothers, Larry and Ray, while his father worked for Central Vermont Railroad. It was an upbringing that instilled the values of self-reliance and pragmatism that would guide him throughout his long life. At the age of 17, Joe enlisted in the United States Navy, serving his country from 1945-1948. He was proud to be a corpsman in the Navy. Those years spent on the seas and in other parts of the world forged a lifelong love of travel. After his discharge from the Navy, Joe returned to Vermont and earned his B.S. in Zoology at the University of Vermont. Upon graduation, he took a job in biological and pharmaceutical research with Hazleton Laboratories in Falls Church, Virginia. After years of raising and studying animals, now it was time to dissect them! Joe found his calling in the field of applied science. While working at Hazleton, Joe earned his Master’s from George Washington University, and was then accepted as the first student in the nascent MD/PHd program in Pharmacology at UVM. In 1966, after graduation, he embarked on a 31-year career as an anesthesiologist. Joe loved being a physician. If fit his personality perfectly. Being responsible for his patients’ well-being was a direct reflection of his internal nature to provide calm and comfort in an otherwise unpredictable situation. An old-school doctor to the core, Joe believed in the healing and restorative power of medicine. He practiced at both Kerbs and St. Albans General hospitals in Vermont, and then moved to Cooley Dickinson Hospital in Northampton, MA. in 1975. He also spent one term as President of the Massachusetts Anesthesia Society. Joe enjoyed a distinguished career during a time of great advancement in the field of medicine. An inveterate learner, he stayed on top of all the improvements and new techniques in his field. It seemed there wasn’t anything that he couldn’t accurately diagnose, and yet his understated approach to life would often lead to his favorite piece of medical advice to his children: put a band-aid and Neosporin on it, and you’ll be just fine! It can be said that there was one instance of Joe breaking character and throwing caution to the wind. As if raising two teenaged daughters on his own wasn’t hard enough, he married his wife, Bobbie in 1974, and as part of the package deal, got five more kids in the process. Who does that? Joe would spend the rest of his life in the role of a loving father. He educated us, coached us, stitched us up, provided discipline but also a long leash, saw to our every need, and more than anything, showed us the value of hard work and dedication to family. He was so proud of all his grandchildren, and they absolutely adored their Grampy in return. Most of all though, this is a love story. Joe and Bobbie shared 48 remarkable years together. They raised their family and enjoyed time spent with their many friends. They traveled extensively and navigated life’s challenges, hardships, and successes. It wasn’t so much a case of opposites attracting as it was two people who blossomed through their mutual love and admiration, and who shared the same values that always put family first. They were the perfect match. In 1997, Joe and Bobbie moved to the warmer climate of Bonita Springs, Florida, where they became founding members of the Pelican Landing community. Joe especially enjoyed being a member of the Pelican Landing Singers and the Naples Barbershop Chorus, where his rich tenor was always a concert highlight. Joe is survived by his wife, Bobbie; his children Tricia Biamonte (Mark), Ellen Davis (Keith), Jodi Petkovich (Michael), Ed Read (Trish), and Dan Read (Holly). Joe also adored his 12 grandchildren and 4 great-grandchildren. He was predeceased by his daughter Susan Ebol (Steve), and son David Read. If the true measure of a man is the happiness that he brings to others, then Joe went out on top. How best to describe Joe in one word? Caring? Brilliant? Practical? How about selfless. Nothing was ever about Joe. It was all about taking care of others: his family, his patients, his friends, his animals, his plants. He made so many lives better than they would have been without him, and for this, the world is a better place. Joe will be placed at the Sarasota National Cemetery on April 26, 2022. In lieu of flowers, please consider a donation in Joe’s memory to Home Base of Southwest Florida (www.homebase.org/swfl) or Joanne’s House at Hope Hospice (www.hopehospice.org). To sign Joe’s guest register or to leave on line condolences, please visit www.ShikanyFuneralHome.com Arrangements are being handled by Shikany’s Funeral Home & Crematory Family Owned and Operated Since 1978.

Joseph Beauregard, devoted husband, wonderful father, respected doctor, and friend to all he knew, passed away on April 2nd at the age of 94. Joe was fortunate to spend his last days surrounded by family, and in typical fashion, he left without... View Obituary & Service Information

The family of Joseph R. Beauregard created this Life Tributes page to make it easy to share your memories.