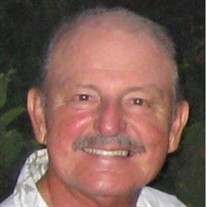 Joseph Richard Etienne, 83, of Charlevoix, MI, and Estero, FL, passed away on December 19, 2021 in Estero. Joseph was born on March 26, 1938 in Evanston, Illinois, the son of Joseph and Katherine (Peltonen) Etienne. He graduated from Charlevoix High School in 1956, where he played basketball, football and track all four years. Joe was well known as one of the “Four Coons”, a comedic pantomime quartet, with high school best friends Quintin Walker, Kit Carson and Terry Davis. Joe attended Coe College where he played football, went on to obtain his bachelor’s degree in physical education from Northern Michigan University in 1961, and later obtained his master’s degree from Central Michigan University. As a natural performer and dancer, he made his movie debut as an “extra” dancing in the film Anatomy of a Murder, which was filmed in Marquette County in the Upper Peninsula in 1959. Joe married Judith MacDonald in 1962 and had two children, Mark and Christine. Joe, also known as “Coach”, was a passionate teacher and coach from 1961 to 1978 in Saginaw, Bay City and Carrollton, MI, and treasured his years coaching track and football athletes, some of whom have been inducted into the Saginaw County Sports Hall of Fame. Joe returned to Charlevoix in 1978 to become an entrepreneur and the owner of the Kentucky Fried Chicken franchise in Charlevoix and became known as “Chicken Joe”. He later also purchased the Kentucky Fried Chicken franchise in Petoskey. Joe married Christine “Chris” Chase on December 31, 1982, and enjoyed nearly 40 unforgettable years together, the last 21 as snowbirds spending their winters in sunny Florida and their summers in Charlevoix the Beautiful. Joe was a competitive golfer and had been a member at Saginaw Country Club, Belvedere Golf Club, Petoskey Bay View Country Club, Bay Harbor Golf Club, Country Club of Boyne, Bonita Bay Golf Club and Country Creek Golf Club. He had three holes-in-one to his credit. Joe is survived by his wife Chris Etienne of Charlevoix, MI, and Estero, FL, and their cat Boots; son Mark Etienne of Grand Rapids, MI, daughter Chris Etienne and her husband Dennis Lindeman of Petoskey, MI; brother Mike Etienne and his wife Norma of Estero, FL, brother Robert Etienne of Kapaa, HI, sister Jeanine Etienne of Kapaa, HI; nieces and nephews: Neal Houseworth, Stephanie Thaxton-Gudith, Susan Nowaczyk, Nicholas Etienne and Tyler Etienne; and special friend and caregiver Janet Domena of Naples, FL. He was preceded in death by his parents Joseph and Katherine Etienne, sister Kathleen Etienne and brother Donald Etienne. Joe would want to be most remembered for his love of great times with family and friends. In lieu of flowers, those desiring may direct memorial contributions to the Charlevoix County Humane Society, 614 Beardsley St., Boyne City, MI 49712, charlevoixhumane.org. A celebration of life will be held this summer in Charlevoix. Arrangements are being handled by Shikany's Bonita Funeral Home, Family Owned Since 1978.

Joseph Richard Etienne, 83, of Charlevoix, MI, and Estero, FL, passed away on December 19, 2021 in Estero. Joseph was born on March 26, 1938 in Evanston, Illinois, the son of Joseph and Katherine (Peltonen) Etienne. He graduated from Charlevoix... View Obituary & Service Information

The family of Joseph R. Etienne created this Life Tributes page to make it easy to share your memories.

Send flowers to the Etienne family.