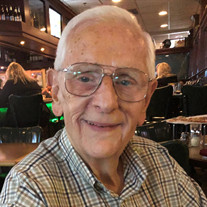 Joseph A. Kaiker, Jr., 87 of Estero, FL, and a former lifelong resident of Chicago, IL died January 26, 2022, at Joanne’s House at Hope Hospice. He was born December 4, 1934, in Chicago, IL a son of the late Joseph A. and Edith (Neilson) Kaiker, Sr. He had been a resident of Estero for the past four years coming from Orland Park, IL where he had been a resident since 1976. He was a graduate of St. Rita’s High School in Chicago. From 1954 to 1956, he served in the U.S. Army during the Korean Conflict and was stationed at the United Nations Command Military Armistice Commission Head Quarters. After the war, he joined the Chicago Police Department where he was a patrolman until 1962. He then became a general agent for Allstate Insurance Company until his retirement in 2000. He is survived by his devoted son, Joseph A. Kaiker, III of Estero, FL; two daughters, Karen Young and her husband, Roy of Sandpoint, ID and Kathryn A. Vargas of Coeur d Alene, ID and one grandson, Ryan Joseph Kaiker. A Funeral Mass will be celebrated at Our Lady of the Woods Parish in the spring at a date still to be determined. Burial will be at St. Casimir Cemetery in Oak Lawn, IL. In lieu of flowers donations in his memory can be made to either St. Rita of Cascia High School 7740 S. Western Ave., Chicago, IL 60620 or online at https://www.stritahs.com/donate or to the American Heart Association 7272 Greenville Ave., Dallas, TX 75231 or online at https://www.heart.org/. To sign his guest register or to leave online condolences please visit www.ShikanyFuneralHome.com. Arrangements are being handled by Shikany’s Bonita Funeral Home Family Owned and Operated Since 1978.

The family of Joseph A. Kaiker Jr. created this Life Tributes page to make it easy to share your memories.

Send flowers to the Kaiker family.