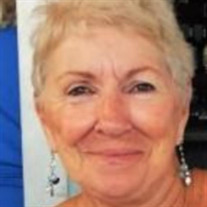 Lucille P. (Belisle) Bradley (aka “Bunny”) passed away peacefully on April 21, 2022 at the age of 85, in Bonita Springs, Florida. Born on April 14, 1937, to Rachel and Gerard Belisle in Woonsocket, Rhode Island. She attended the Convent of Jesus-Marie and St Claire High School in Woonsocket RI and graduated in 1955. When she was young, she worked at her father’s business in Cumberland RI. Work throughout her life included family business’, banking, finance, and the hardest job of all, raising 2 boys. However, the work she loved most was being a caravan leader for the Airstream Travel Trailer Company for over a decade, leading groups of like-minded explorers to locations as far north as Alaska and south, deep into the interior of Mexico, the Baja and everywhere in between. During those years she visited nearly every state and province in North America. Her true love was traveling. After retiring from traveling, she settled in Titusville, Florida where she continued to grow her ever expanding universe of friends. With her beautiful smile, sense of humor, and infectious laugh, to know her was to love her and anyone that met her was an instant friend. To say she was active would be an understatement. She was legendary for her exercise regime and the envy of most that tried to keep up. In 2010, she decided to relocate to Estero, Florida to be closer to her son’s Jay and Michael. Reluctant to leave her friends behind in Titusville she quickly made more new “best friends” with her continued active lifestyle. True to form, leaving more people short of breath just trying to keep up. A perfect example of how fit and active she was, she decided to try roller blading at the age of 70+ and jumping on a trampoline with her 15-year-old granddaughter Kenzie, at the age of 80! True story and we have the pictures and video to prove it. Right up to the end, she was doing what she loved most, enjoying food and friends. She is survived by her husband James of 64 years; sons Jay and Michael Bradley and daughter-in-law Monica Bradley; brother Gerard Belisle of North Kingstown RI; nephew John Belisle; niece Jo-Ann Belisle; and grandchildren Hannah, Mackenzie, and Maxwell Bradley. She is also survived by her sister in law Ann Collins, husband Jim, nephew Jimmy, and nieces Lisa and Kathy. In lieu of flowers, please send donations in her name to Joanne’s House at Hope Hospice, 27200 Imperial Parkway, Bonita Springs, Florida, 34135. To sign Bunny’s guest book or to leave an online condolence, please visit www.ShikanyFuneralHome.com Arrangements are being handled by Shikany’s Bonita Funeral Home & Crematory Family Owned and Operated Since 1978

The family of Lucille Pauline Bradley created this Life Tributes page to make it easy to share your memories.

Send flowers to the Bradley family.