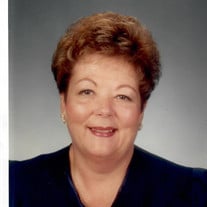 Unexpectedly on Monday April 11, 2022 Margaret A. Martin of Naples, FL died at Physicians Regional Hospital. Peggy was born in Philadelphia, PA on August 28, 1939 to Margaret A. Zahn Morris and James Patric Morris. She was predeceased by her beloved parents and son, Joe. Peggy is survived by her husband, Jack, whom she met at a garage sale and married in 1975; her sister, Kass Zaccaria; two daughters, Kathy Meneley and Connie Falato; and seven grandchildren, Nicole, Jesse, Montana, Cory, Riley, Joey and Patrick. Peggy graduated from West Catholic High School in Philadelphia, PA and soon entered the Sisters of Bon Secours in Baltimore, MD. After spending several years in the convent, she decided to serve God in another way, finishing her nurses training at Lankenau Hospital in Wynnewood, PA. After receiving her R.N. in 1963, Peggy embarked on a career that included several supervisory positions before finding her niche in Geriatrics. After several years as a Director of Nursing, she went on to obtain her Administrator’s license. She was transferred to Naples, FL in 1979 to take over as Administrator of Golf Drive Residence, now known as Heritage Healthcare Center. She then went on to open Bentley Village, The Aristocrat, Lely Palms, Windsor Court and The Carlisle Naples. Peggy spent 31 years serving the geriatric community in Naples and thoroughly enjoyed serving the residents under her care. Peggy was the recipient of the Administrator of the Year award in 2008 which she greatly cherished. Peggy’s greatest achievement was that she always fostered in others the motivation to succeed and to do their best. Peggy’s personal life was closely aligned with her professional life, however her family always came first regardless of how busy she was, time was always found to cook Sunday family dinners and to enjoy her grandchildren. She especially enjoyed boating, crafting, reading and was an avid gardener tackling the most challenging projects. Peggy especially loved travelling with her husband and sister over the years. Together they visited many countries and cities, meeting many new friends along the way. She will always be remembered for making Christmas really special for everyone, selecting special gifts, wrapping each package individually paying attention to making each package more intriguing than the last. Upon retiring in 2010, Peggy had the opportunity to enlarge her garden and enhance her orchid benches. She will be fondly remembered as a loyal person and most of all a wonderful and loving mom and grand mom. Peggy never lost faith even when things were at their worst. She always held God close to her heart and practiced what she preached despite what others might have thought. A memorial mass for Peggy will be celebrated on Friday, April 22, 2022 at 10 AM in St. John the Evangelist Catholic Church and inurnment will be in St. John’s Evangelist Memorial Garden following the service. No flowers please, donations in Peggy’s memory can be made to St. Matthew’s House or the Salvation Army. To sign Peggy’s guest register or to leave online condolences, please visit www.ShikanyFuneralHome.com. Arrangements are being handled by Shikany’s Bonita Funeral Home, Family Owned and Operated since 1978.

Unexpectedly on Monday April 11, 2022 Margaret A. Martin of Naples, FL died at Physicians Regional Hospital. Peggy was born in Philadelphia, PA on August 28, 1939 to Margaret A. Zahn Morris and James Patric Morris. She was predeceased by... View Obituary & Service Information

The family of Margaret "Peggy" Martin created this Life Tributes page to make it easy to share your memories.

Send flowers to the Martin family.