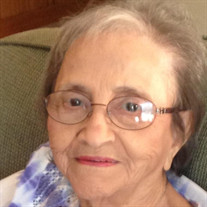 Maria Luisa (Zepeda) Flores, age 101, of Bonita Springs, FL passed away March 16, 2022. Mary, as she was best known, was born on October 13, 1920, in Tegucigalpa, Honduras. The daughter of Pablo Zepeda and Francisca Valladares Zepeda, she was preceded in death by her parents, her former husband Francisco Flores, one brother and three sisters, and her beloved son Dicky Flores. Mary is survived by her two children, Carole (Danny) Martin and Robert (Carol Kubie) Flores; her dear sister, Andreita Javier; and daughter-in-law, Kay Stough Flores. Lovingly known as Abuelita by her seven grandchildren who survive her, Gene David, Eric, Steven, Keith, Annmarie, Stephanie, Sara and seventeen great grandchildren: Darby, Kirrin, Aron, Isabella, Willow, JP, Lolo, Lexi, Westin, Keionna, Kaleah, Koral, Grace, Annah, Sam, Devante, Ruby and two great great grandchildren, Cameron and Caiden. As a young married couple Mary and her husband left their beloved Honduras for Washington DC where they arrived as World War II was winding down. Among her memories of this time was standing with many Americans on the boulevards of DC to bid farewell to President FDR. They returned to Honduras a few years later where her career life began. Mary was an elementary school teacher, educating many students who grew to become prominent professionals. In later years she worked at the American Embassy in Tegucigalpa. In 1970, life and her family brought her to Miami, Florida where she lived for many years until moving to Orlando with Carole and her husband Danny. During those years she traveled to Honduras and many other places to visit family and friends. In early 2020 she moved to Bonita Springs with daughter Carole and husband when they retired. With her loving, caring and kind nature Maria Luisa (Mary, Tia Mary, Abuelita) leaves behind an enormous family of nieces, nephews, godchildren, and friends. Funeral Mass will be held on Saturday, April 9th, 2022 at 12:00 PM at St. John the Evangelist Catholic Church, 625 111 Avenue North, Naples, Florida. To sign her guest register or to leave online condolences please visit www.ShikanyFuneralHome.com. Arrangements are being handled by Shikany’s Bonita Funeral Home, Family Owned and Operated since 1978.

Maria Luisa (Zepeda) Flores, age 101, of Bonita Springs, FL passed away March 16, 2022. Mary, as she was best known, was born on October 13, 1920, in Tegucigalpa, Honduras. The daughter of Pablo Zepeda and Francisca Valladares Zepeda, she was... View Obituary & Service Information

The family of Maria Luisa Flores created this Life Tributes page to make it easy to share your memories.

Send flowers to the Flores family.