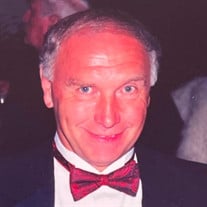 Marvin E. Metzinger, 85 of Estero, FL passed away peacefully on Tuesday, February 1, 2022 at Joanne’s House at Hope Hospice in Bonita Springs, FL. Born in Oil City, PA Marv was the son of the late Edward and Mae Ann Metzinger. He attended Oil City Senior High School and graduated in 1955. After graduation he went to California with his best friend for a year. Upon returning to Oil City he enrolled at West Virginia University where he received a scholarship for wrestling. He graduated in 1959 with a B.S. in Physical Education and Biology. Marvin married the light of his life Ann Maher and they had one daughter. They moved to Caldwell, OH where he was a basketball coach at Summerfield High School. A couple of years later, he moved to New Concord, OH where he was a school teacher as well as a basketball and football coach at John Glenn High School. Eventually leaving coaching and moved to Columbus, OH where he pursued a career with Merck that moved him to Springfield, Oh. He was a pharmaceutical rep for 28 years and was the top salesman in the country three different times. After retiring they moved to Bonita Springs in 2011 to be close to their daughter, son in law and grandchildren. Marv will be remembered for having great friendships with his tennis buddies and wonderful trips to Hilton Head, as well as his gift of storytelling and love of sports. Most importantly, he will be remembered for the love he had for the love of his life, Ann whom he first laid eyes on in when she was in 10th grade, and of course his daughter, son in law and grandchildren. He was preceded in death by a brother, Chester Metzinger; sister, Verna Rosenberg; and sister-in-law, Roberta Maher. He is survived by his loving wife, Ann; his daughter, Kimberly (Thomas); grandchildren, Elizabeth and Tommy Amendola; brother-in-law, Steve Maher; and many nieces, nephews and cousins. The family wishes to express their sincere appreciation to Joanne’s house at Hope Hospice for all their kindness and support during this difficult time. The service will be private with a celebration of life to follow at a future date. Arrangements are being handled by Shikany's Bonita Funeral Home, Family Owned Since 1978.

The family of Marvin Edward Metzinger created this Life Tributes page to make it easy to share your memories.

Send flowers to the Metzinger family.