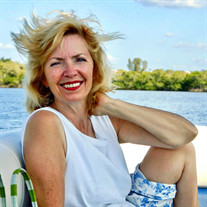 Mary Ellen Hilden Chabot, 77, a retired collectibles entrepreneur who also showered her family, friends and neighbors with her gourmet meals and dessert confections, died April 12 in Bonita Springs, FL after a sudden six-week fight against cancer. She was born in Vallejo, CA on June 25, 1943, where her father worked in the shipyards, building submarines for the World War II fleet. She graduated from high school in Wabeno, WI in 1961 and from the University of Wisconsin-Oshkosh in 1965, and worked as a social worker in Ontonagon, MI, where her parents, the late Arnold and Dolores Hilden, resided. It was there that she met and married Dan Chabot, a journalist who later joined the staff of The Milwaukee Journal and eventually became editor of its legendary Green Sheet section. For many years Mary Ellen owned and operated a thriving collectibles shop in Thiensville, a Milwaukee suburb. Starting with $200 in merchandise, she ran a mail order business out of her home for a time, a business called Beauchene's Limited Editions and Christmas Shop, which eventually expanded into retail space and grew into an enterprise exceeding $1 million in annual sales. She had an unerring eye for fine collectibles and art, and often spotted emerging artists and trends long before they became public favorites. Among her many such discoveries were Dept. 56 Christmas villages and Christopher Radko's hand-blown Christmas ornaments. Her personal touch with customers was legendary. She often wrote two- and three-page heartfelt letters to mail-order customers. Many of them, as well as visitors to her store, became close, lifelong friends. It was not uncommon for entire far-flung families and groups of friends to buy from her and join her long line of admirers. But she always claimed her greatest joy and biggest accomplishment was her family, and in creating a home filled with love, laughter, happiness and peace. "In our house, every day was like Christmas" remembers one of her sons. She loved spending time with her family, doting on their accomplishments, rejoicing in the company of her grandchildren. She made pies and cakes with Carson and Easton, immersed herself in shopping trips with Lafayette and Troy, admired the athletic skills of Noah and Wyatt. She was a free spirit and a world traveler who cherished every trip, yet was always happy to return home to the Midwest small-town values of her childhood. One of her many friends described her as a constant ray of summer sunshine, brimming confidence and bright optimism. When Mary Ellen and Dan retired to Bonita Bay, in Bonita Springs, FL, in 2004, she set about cultivating a new round of friends and admirers through her involvement in community activities. In Bonita Bay she was known to prepare entire gourmet meals for stricken friends and their families, and from her kitchen, concoct spontaneous savory confections for friends and neighbors. The move to Florida also gave her another opportunity to apply her exquisite taste in colors, fashion, fabrics and interior decorating to her new quarters. She is survived by her husband, Dan; three sons, Gregory (Sally) of Bainbridge Island, WA, Christian (Angela) of Seattle, and Brett (Dawn) of Singapore; a sister, Christine (Bernie) Gregorich of Ontonagon; two brothers, Thomas (Bonnie) Hilden of Green Bay, WI and John (Carolyn) Hilden of Marquette, MI; and six grandchildren: Lafayette and Wyatt of Bainbridge Island, Noah and Troy of Seattle, and Carson and Easton of Singapore, plus numerous cousins. A funeral Mass will be held on Thursday, April 22 at 1 p.m. at St. Leo Catholic Church in Bonita Springs. The remains are to be cremated. At her request, her ashes are to be spread one day in Yosemite National Park in California, a place she and Dan loved and visited often. In lieu of flowers, please consider a donation in Mary Ellen's name to the Cholangiocarcinoma Foundation, online at www.cholangiocarcinoma.org/chabot or by mail to CCF, 5526 West 13400 South, #510, Herriman, Utah 84096. To sign Mary Ellen’s guest register or to leave online condolences, please visit www.ShikanyFuneralHome.com. Arrangements are being handled by Shikany’s Bonita Funeral Home Family Owned and Operated Since 1978.

The family of Mary Ellen Chabot created this Life Tributes page to make it easy to share your memories.

Send flowers to the Chabot family.