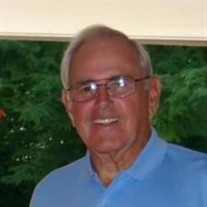 Melvin D. Munroe passed away peacefully on February 15, 2022 from failing health with close family members by his side. Melvin was born in Waterboro, Maine on August 25, 1934. He grew up in South Portland, Maine and graduated from South Portland High School in 1952. He married Patricia Harvey on March 21, 1953 and settled in Connecticut where they raised four children. Mel served in the United States Air Force and was honorably discharged in 1957. Mel made a career change from milkman to teacher, graduating from Central Connecticut State College in 1968. He had a distinguished teaching career at Coventry High School in Coventry, Connecticut. He was beloved by his students and was named Town of Coventry Teacher Of The Year in 1988. He retired in 1994 and he and Pat fulfilled their retirement dream by moving to Citrus Park in Bonita Springs, Florida where they made many close friends. Mel was a proud member of the Citrus Park Softball League for about 25 years. In 2019 Mel was proud to participate in the Collier-Lee (FL) Honor Flight to Washington, DC which celebrated United States war veterans. Mel was predeceased by his beloved wife, Pat in 2008; siblings, Raymond Clark and Virginia Lovejoy; his beloved cousin George Hazel; and grandson, Benjamin Lanning, Jr. He leaves behind his children, Michael (Joan) Munroe, Keith (Terry) Munroe, Gary Munroe and Dorothy Munroe; and grandchildren, Sarah, Peter, Faith and Jeremy. Mel was a wonderful father and grandfather and had great faith in God which sustained him during his final days. Special thanks to Hope Hospice for their compassionate care and a very special thanks to caretaker Missy Beswick for her extraordinary dedication to fulfill Mel’s wish to pass away at his home. Donations in Mel’s memory can be made to Hope Hospice, 27200 Imperial Parkway, Bonita Springs, FL 34135. Per Mel’s wishes, his ashes will be scattered at Portland Head Light, Maine at a private family celebration this summer. To sign Mel’s guest register or to leave online condolences, please visit www.ShikanyFuneralHome.com. Arrangements are being handled by Shikany’s Bonita Funeral Home, Family Owned and Operated since 1978.

Melvin D. Munroe passed away peacefully on February 15, 2022 from failing health with close family members by his side. Melvin was born in Waterboro, Maine on August 25, 1934. He grew up in South Portland, Maine and graduated from South Portland... View Obituary & Service Information

The family of Melvin D. Munroe created this Life Tributes page to make it easy to share your memories.

Send flowers to the Munroe family.