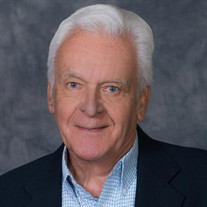 Michael A. Kowalski, 82, of Naples, FL, passed away Saturday, December 4, 2021 at Gulf Coast Hospital. A former Michigan resident, he had been a Naples resident for the past 23 years. He had also lived in Indianapolis, IN and Bradenton, FL. Michael was the eldest son of the late William J. And Carolyn (Szymoniak) Kowalski. He was born on March 9, 1939 in Detroit and raised in Michigan. He held many fond childhood memories of summers spent at his grandparents’ farm in northern Michigan, and of his service and youth leadership with the Boys Club of Detroit throughout his school years. Michael met the love of his life, Irene, in high school and they most recently celebrated their 62nd wedding anniversary. Fresh out of high school, he began his career as an insurance agent with the Allstate Insurance Company, where he worked for 15 years. He continued his insurance career in Indianapolis and Naples until his retirement in 2009. Michael was an avid football fan who cheered on the Detroit Lions, the Tampa Bay Buccaneers and the University of Michigan Wolverines. He also enjoyed Indy Car racing and he and Irene had many wonderful memories of fun times at the Indianapolis 500. He was proud to be a member of the Knights of Columbus, St. John Council #11281. He was also very active with the Sterling Oaks Homeowners Association in Naples. Throughout his career and life, he had a knack for making everyone feel welcome and appreciated. If you told him your name, you could be sure he would remember it. He was always a gracious host and a loyal friend. Most of all, Michael loved and supported his family, celebrating special occasions and appreciating times together. Survivors include his beloved wife, Irene M. (Zalewski) Kowalski; loving daughters Debra (John) McCracken of Brighton MI, Laurie (Matt) McAuliffe of Rochester, MI; brother, Bill Kowalski of Plymouth, MI; sister, Barbara (Jim) Cipkowski of Dearborn Heights, MI; cherished grandchildren, Jennifer (Don) McIntosh, Amanda (Brad) Clemons, Jack McAuliffe, Kate McAuliffe; and precious great granddaughters Alice, Lucille and Eleanor. A family memorial service will be held in Michigan at a later date. In lieu of flowers, memorial contributions in Mike’s name may be made to St. Jude Children’s Research Hospital, 501 St. Jude Place, Memphis, TN 38105, www.stjude.org. Arrangements are being handled by Shikany’s Bonita Funeral Home, Family Owned Since 1978.

Michael A. Kowalski, 82, of Naples, FL, passed away Saturday, December 4, 2021 at Gulf Coast Hospital. A former Michigan resident, he had been a Naples resident for the past 23 years. He had also lived in Indianapolis, IN and Bradenton, FL.... View Obituary & Service Information

The family of Michael A. Kowalski created this Life Tributes page to make it easy to share your memories.

Send flowers to the Kowalski family.