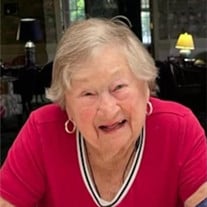 Nadine T. Rouvelas (Meyer) 93, of Bonita Springs, FL formerly of Cranston, RI, went to her Lord Tuesday, April 19, 2022. She was the wife of the late Zacharias P. Rouvelas. They were married for 60 years before his passing on January 12, 2013. Born January 22, 1929 during a blizzard in Orient, S.D., she was the daughter of the late Benjamin and Bertha (Wortman) Meyer. She is survived by her daughter Teresa M. Santagata, of Newport R.I. and her son, Gary P. Rouvelas, with whom she resided the past 5 ½ yrs., grandchildren, Krystan M. Santagata of Cranston, R.I. , Thomas Z. Santagata of Johnston, R.I., and Allison P. Rouvelas of Fort Mill, S.C. She is also survived by her sister, Dolores Miesen, of Sioux Falls, S.D. and many nieces and nephews across the Great United States. Nadine was a woman of many talents, she taught in a one room schoolhouse in S.D., was a bank teller, switchboard operator and then a bookkeeper for Grandview Trailer Sales in Rapid City, S.D. where she was introduced to her husband by her best friend, Leo Pappas, both of whom who were stationed at Rapid City A.F.B. , now Ellsworth A.F.B. They were married Dec 22, 1952 at the base by The Reverend James Sheehan. They moved back to R.I. in 1955. There they started Brook Florist in North Providence, then in 1965 they opened Garden Hills Florist in Cranston. Nadine then joined AFLAC in 1976 and became State Manager for them, retiring in 1993. YiaYia, as she was known, enjoyed baking and cooking with her grandchildren. Jack and Nadine travelled extensively across the world, and spent years driving their many motorhomes across The USA. Nadine was a communicant at St. Leo the Great Catholic Church in Bonita Springs, and also Immaculate Conception Church in Cranston, R.I. A celebration of her life will be held Sunday, May 1, 2022 at 2:00 PM in the Clubhouse at Southern Pines Community 26300 Southern Pines Dr., Bonita Springs, FL. She will be interred with her husband in Highland Memorial Gardens in Johnston, R.I. Donations may be made in her name to St. Jude’s Research Hospital. To sign her guest register or to leave online condolences please visit www.ShikanyFuneralHome.com. Arrangements are being handled by Shikany’s Bonita Funeral Home Family Owned and Operated Since 1978.

Nadine T. Rouvelas (Meyer) 93, of Bonita Springs, FL formerly of Cranston, RI, went to her Lord Tuesday, April 19, 2022. She was the wife of the late Zacharias P. Rouvelas. They were married for 60 years before his passing on January 12, 2013.... View Obituary & Service Information

The family of Nadine T. Rouvelas created this Life Tributes page to make it easy to share your memories.

Send flowers to the Rouvelas family.