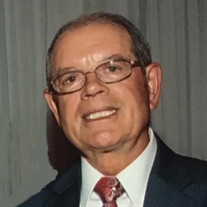 Nelson Santos Botelho 77, of Estero, FL died Tuesday, February 9, 2021 at Joanne’s House at Hope Hospice after a brief battle with pancreatic cancer. He was born on October 19, 1943 in Nordeste, Sao Miguel, Azores, Portugal a son of the late Artur Botelho Pimentel and Nicolina (DeSousa) Botelho. He had been a resident of Estero for the past 11 years coming from Boca Raton, FL. He earned his Associates's degree from Johnson & Wales University in Providence, RI in hotel management. Nelson worked as a hotel manager for a number of years and eventually became co-owner and manager of the Crystal Inn in North Ft. Lauderdale for nearly 20 years. He loved spending time with his nieces and nephews, talking about their accomplishments & future plans and playing with their children. He was an avid tennis player, loved to play golf, go swimming and gardening. He also enjoyed playing pickleball. He was a parishioner at Our Lady of Light Catholic Community and a member of the Portuguese Club in Ft. Myers, FL. Nelson is survived by his loving wife, Cecilia M. Botelho of Estero, FL; one son, Alex S. Botelho of Miami, FL; and two sisters, Clotilde Cabral and Conceicao Farias of Portugal. He was preceded in death by his parents; his son, Frederick S. Botelho who died in April of 2006 and his brother, Gabriel Botelho. The family will receive friends on Friday, February 12, 2021 from 6:00 PM to 8:00 PM at Shikany’s Bonita Funeral Home 28300 So. Tamiami Tr., Bonita Springs, FL. A Mass of Christian Burial will be celebrated on Saturday, February 13, 2021 at 9:30 AM at Our Lady of Light Catholic Community 19680 Cypress View Dr., Ft. Myers, FL 33967. Entombment will follow at 1:30 PM at Boca Raton Cemetery and Mausoleum 451 SW 4th Ave., Boca Raton, FL 33432. In lieu of flowers, the family asks that donations in memory of Nelson be made to St. Jude Children’s Research Hospital 501 St. Jude Place, Memphis, TN 38105-9959. To sign his guest register or to leave online condolences please visit www.ShikanyFuneralhome.com. Arrangements are being handled by Shikany’s Bonita Funeral Home Family Owned and Operated Since 1978.

Nelson Santos Botelho 77, of Estero, FL died Tuesday, February 9, 2021 at Joanne&#8217;s House at Hope Hospice after a brief battle with pancreatic cancer. He was born on October 19, 1943 in Nordeste, Sao Miguel, Azores, Portugal a son of the... View Obituary & Service Information

The family of Nelson Santos Botelho created this Life Tributes page to make it easy to share your memories.

Send flowers to the Botelho family.