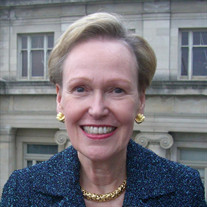 Patricia Young Barton passed away peacefully at home in Bonita Springs, Florida on August 22, 2021 surrounded by loved ones. Trisha handled a difficult cancer diagnosis with courage, positivity and faith. Born on November 19, 1942 in East Saint Louis, Illinois, Trisha was the oldest child of the late Roland Young and Mary Ellis. She grew up in Oklahoma City and graduated from the University of Oklahoma. On November 22, 1969, she married David Barton in Dallas, Texas and taught fourth grade at Harry C. Withers Elementary School. Together they raised two daughters, Melinda and Jennifer, in Connecticut. Trisha moved to Darien, Connecticut in 1989 and in 1997 retired in Bonita Springs, Florida. She was a longtime member of the County Club of Darien and the Bonita Bay Club. Trisha’s joy was raising her two girls and spending time with her grandchildren. Trisha was a dedicated volunteer for several organizations, including Child & Family Charities, the YWCA in which she co-managed the campaign for a new building, and Joanne’s House at Hope Hospice. Trisha connected deeply with her Sister’s Circle at Noroton Presbyterian Church for more than 30 years and with her special women’s group at First Presbyterian Church of Bonita Springs. She and her fellow members of PEO shared many laughs and volunteer hours over more than 30 years. Trisha’s friends describe her as a magnet for kindness and love. Trisha is survived by her husband of 52 years, David Barton, her daughter Melinda Stewart and husband Tarun Stewart of Darien, CT, her daughter Jennifer Barton and husband Willard Morgan of Alna, Maine. A great joy in her life were her four grandchildren, Malcolm and Rowan Stewart and Sierra and Zella Morgan. She was close with her sibling, John Robert Young of Bonita Springs, Florida. A memorial service will be held at First Presbyterian Church, Bonita Springs, Florida in October. In lieu of flowers, contributions in Trisha’s honor may be sent to Memorial Sloan Kettering Cancer Center, Moffitt Cancer Center, The Florida Cancer Specialists or a charity of your choice. To sign Trisha’s guest register or to leave online condolences, please visit www.ShikanyFuneralHome.com. Arrangements are being handled by Shikany’s Bonita Funeral Home and Crematory, Family Owned and Operated since 1978.

The family of Patricia Young Barton created this Life Tributes page to make it easy to share your memories.

Patricia Young Barton passed away peacefully at home in Bonita...

Send flowers to the Barton family.