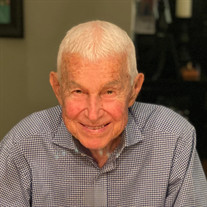 &#65279;Patrick Fred Farace, 88, a resident of Bonita Springs, FL, passed away at Naples Hospital on April 7, 2021 after surgery to repair a fractured hip sustained during a fall at home a couple days prior. Patrick or &#8220;Pat&#8221; as... View Obituary & Service Information

The family of Patrick Fred Farace created this Life Tributes page to make it easy to share your memories.

Send flowers to the Farace family.