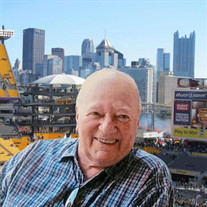 Reed Jerome Davis, 89, of Bonita Springs, FL, reunited with many of his friends and family members in heaven on December 9, 2021. He was born on May 22, 1932 in Akron, OH and spent the majority of his adult life as a proud resident of Pittsburgh, PA. He is survived by his children, Reed James Davis and his wife Teresa, Katherine Davis, Russell Davis, Lynn Davis Murphy and her husband Ken, Ryan Adam Davis and his fiancé Jenifer, his seven grandchildren, Kayleigh, Reed, Courtney, Riley J., Conor, Katherine, Riley D., and his great-granddaughter, Vanessa. He completed his undergraduate degree at the University of Pittsburgh in 1954 and graduated from the School of Law in 1958. He was a brother of Theta Chi fraternity, tennis player, pole vaulter and member of the Heinz Chapel Choir and other singing groups during his collegiate years. His professional accomplishments were legion. Within only three years of earning his law degree, he founded his own law firm in downtown Pittsburgh, which grew to 24 attorneys and 50-plus total employees at its peak. Over his 55 year legal career, he served such clients as Mellon Bank, Ford, Toyota and Chrysler, and was named Hardest-Working Attorney in Pittsburgh in 1996 by the Pittsburgh Business Times, among countless other professional awards and accolades. Reed was a diehard fan of Pitt Athletics, especially football, and the Pittsburgh Steelers, leaving behind a legacy of black-and-gold-blooded offspring. As an athlete, post-college, he was an accomplished tennis, racquetball, and handball player, winning the Allegheny County Bar Association Bench Bar Annual Tennis Tournament Championship on numerous occasions. He was a lover of Christ and music, who contributed his vocal talents to the tenor section of his church and numerous secular choirs throughout the entirety of his life in both Pittsburgh and Southwest Florida. His love of singing was enjoyed by all who knew him, no matter the setting. He is no doubt thrilled to now add his voice to the choir of angels in heaven and looks forward to one day being heard again by the loved ones he leaves behind. A viewing will be held at Shikany’s Bonita Funeral Home, 28300 S. Tamiami Trail, Bonita Springs, FL 34134 on Friday, December 17, 2021 at 1:00 PM, with a funeral service beginning at 3:00 PM. To sign Reed’s guest register or to leave online condolences, please visit www.ShikanyFuneralHome.com. Arrangements are being handled by Shikany's Bonita Funeral Home and Crematory, Family Owned and Operated since 1978.

Reed Jerome Davis, 89, of Bonita Springs, FL, reunited with many of his friends and family members in heaven on December 9, 2021. He was born on May 22, 1932 in Akron, OH and spent the majority of his adult life as a proud resident of Pittsburgh,... View Obituary & Service Information

The family of Reed Jerome Davis created this Life Tributes page to make it easy to share your memories.

Reed Jerome Davis, 89, of Bonita Springs, FL, reunited with many...

Send flowers to the Davis family.