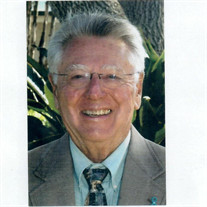 Dr. Richard Lionel Purdy, 93 of Naples, FL passed away peacefully on Saturday, January 1, 2022 at Arbor Glen at Arbor Trace. Formerly of Portage, MI he had been a resident of Naples for the past 15 years. Richard was born June 12, 1928 at home in Battle Creek, MI the son of the late Lionel and Olive (Schanzenbaker) Purdy. He graduated from Battle Creek Central High School in 1946 and attended Western Michigan University where he took his pre-dental studies. Richard then earned his Doctorate of Dental Surgery degree at Northwestern University Dental School in Chicago, IL in 1953. On July 5, 1953 he married Olive Jean Huss and they spent 49 years together until her passing in 2003. In October of 1953, Dr. Purdy enlisted in the United States Army Dental Corps as a First Lieutenant and served two years at Brooke Army Hospital in San Antonio, TX. Following an honorable discharge from the United States Army, he started his first dental practice in Kalamazoo, MI. After several years of practicing general dentistry, Dr. Purdy moved to Fort Lee, NJ where he resided while studying orthodontics at Columbia University School of Dentistry in New York City. Upon graduation from Columbia University, the Purdy family moved to Portage, MI where Richard practiced his specialty of orthodontics. His office was the first orthodontics practice in Portage. Dr. Purdy has been a life member of the Delta Sigma Delta Dental Fraternity, the American Dental Association and the American Association of Orthodontics. He was a member of the Portage Rotary Club for 33 years, First United Methodist Church of Kalamazoo since 1964 and was currently a member at First Presbyterian Church of Bonita Springs. Survivors include his wife of 13 years, Beverly A. (Bryceson) Mills; loving children, Margaret (James) Gatherer of Huntsville, AL, Phillip (Lynn) Purdy of Brentwood, TN; and cherished grandchildren, Jim Gatherer, Amy (Nick) Crutcher, Kate Purdy and Kevin Purdy. In addition to his parents, he was preceded in death by his first wife, Olive J. Purdy; and sister, Marilyn Rettman. There will be a celebration of his life at Arbor Trace from 2-4pm on Saturday, February 12, 2022. He will be inurned at Resurrection Garden at First Presbyterian Church of Bonita Springs. In lieu of flowers, memorial contributions in his name may be made to First Presbyterian Church of Bonita Springs, 9751 Bonita Beach Road, Bonita Springs, FL 34135. Online condolences may be offered to the family by visiting www.ShikanyFuneralHome.com.

Dr. Richard Lionel Purdy, 93 of Naples, FL passed away peacefully on Saturday, January 1, 2022 at Arbor Glen at Arbor Trace. Formerly of Portage, MI he had been a resident of Naples for the past 15 years. Richard was born June 12, 1928 at... View Obituary & Service Information

The family of Richard Lionel Purdy created this Life Tributes page to make it easy to share your memories.

Send flowers to the Purdy family.