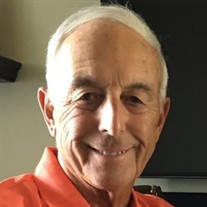 On Monday January 24, 2022, God welcomed Dick St. Jean into heaven. Richard A. St. Jean Sr. was a young 85 years old at his passing. He was comforted by his loving family prior to his passing. Dick lived in Estero, FL with his wife Marilyn since 2010. He was also a long-time resident of Avon, CT, where he and Gabrielle St. Jean (deceased) raised their two boys Rick and Rob St. Jean. Dick was born May 5, 1936, in New Bedford, MA to the late Albert and Betty (Pepin) St. Jean. He served his country in the United States Air Force Reserves as well as the Air National Guard. His career was spent as the owner of a mechanical contracting company before retiring in 1995. When working, Dick was an active leader in Rotary International and earned the distinction of being a Paul Harris Fellow. Dick was a protector and adored his wife Marilyn and the love and care they have been able to enjoy for the past 24 years. The two frequently traveled to be close to their family; Dick especially loved his time in Southern Vermont watching his grandchildren Maggie and Matthew grow up. Dick was an avid tennis player, to the point where he refused to play any other sport. He was known for his crushing lefty forehand. He was a great sport enthusiast who faithfully watched his favored Boston Red Sox and New England Patriots, without missing many games. During his lifetime, Dick traveled the world – he especially loved Bermuda where he found peace and relaxation. He treasured his many adventures around the world and enjoyed sharing photographs and stories of past memories with anyone willing to lend an ear. Dick was a sentimental man with a kind heart. He took pride in everything he and his family accomplished over the years. His death has reminded us all of the importance of family and he has left a light for all those he loved in his life to continue on his legacy. Dick is survived by his loving, caring and devoted wife of 24 years, Marilyn S. (Goldstein) St. Jean; his two boys and their families; Rick, Nancy, Maggie and Matthew St. Jean of Concord, MA, and Robert, Valerie, Andy and Bryant St. Jean of Avon, CT; and his stepsons and their families; Jeffrey, Natalie, Sloane, Presley, and Emelia Schwartz of Coral Gables, FL, and Adam, Jennifer and AJ Schwartz of Lyons, CO. A Mass of Christian Burial will be held on Friday, January 28, 2022, at 11:00 AM at St. Leo the Great Catholic Church, 28300 Beaumont Road, Bonita Springs, FL 34134. A reception to celebrate his life will follow. In lieu of flowers, memorial contributions in Dick’s name may be made to the United States Tennis Association’s Foundation which enables under resourced youth to begin playing tennis, www.ustafoundation.com/donate/ Arrangements are being handled by Shikany’s Bonita Funeral Home, Family Owned Since 1978.

On Monday January 24, 2022, God welcomed Dick St. Jean into heaven. Richard A. St. Jean Sr. was a young 85 years old at his passing. He was comforted by his loving family prior to his passing. Dick lived in Estero, FL with his wife Marilyn... View Obituary & Service Information

The family of Richard A. St. Jean Sr. created this Life Tributes page to make it easy to share your memories.